I don't even know if Psy could do Soviet style justice. Yes, my friends, it still exists, 20 years after the Soviet Union ceased to exist (on the map, but maybe not completely in the Russian mind). 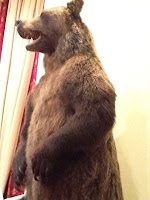 This morning, I dined with a stuffed bear over my shoulder. I am staying in the Radisson Slavyanskaya--a property surely converted from an old-school Soviet hotel. The public areas are immense, but dark and ill-decorated (note the bear). The staff is generally unhelpful and looks at you as if every question asked is the stupidist query in the world. For example, this morning, I asked a concierge and two bellmen where to find the AeroExpress ticket booth in the neighboring Kievskaya Train Station. This question seemed like a no-brainer--I imagine half of the people staying here do so because the hotel sits adjacent to the rail station, from which the express train to Vkunovo airport departs. Not one of the three had a clue. Now, to be fair to Radisson, it's not the brand. For the two previous nights, I stayed at the Radisson Blu Belorusskaya, a new-concept design hotel, and the visit, from the decor, to the staff, to the food, was just lovely.

(I would have stayed on, except the Belorusskaya did not have what the Slavyanskaya has....location, location, location...by the Kievskaya train station. Plus, for an English speaker laid up in bed for 24 hour straight (namely me), the Slavyanskaya certainly had more options on TV, including CNN, CNBC, TCM, BBC, and English versions of NHK, RT and CCTV, plus Eurosport. That said, I found myself drawn to a game show on the Italian RAI. My understanding of the wacky goings-on seemed to prove that the part of the brain that translates languages, once stimulated in a foreign environment, brings to the forefront previouly learned information. Look at me, a writer doing scientific experiments on the fly.)

But, after that digression of a parenthetical paragraph, you, dear reader, may question whether I am actually a writer. Back to our thesis. While you might not realize it from walking down Moscow's main shopping drags, now lined with the stores of luxury brands ranging from Hermes to Mikimoto, or by walking through GUM, the formerly glum shopping mall of chronic Soviet shortages, which is now a deluxe capitalist mecca, but Soviet style still exists, mainly in the form of the service mentality....or lack thereof. 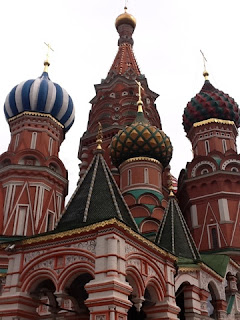 Back in the days of the USSR, yessir, you had a job for life, regardless of your attitude. So, whether you were a hotel clerk, a waiter, or a flight attendant, it didn't really matter if you did your job well...or with pleasure. In talking with some Marriott executives in Moscow, they acknowledged that training staff to have a Western manner of hospitality is still a challenge. Actually, it wasn't a direct acknowledgement as much as a chuckle of agreement when I mentioned the rather dour attitude of the Russian staff that served the Trans-Siberian Express. Indeed, the representative from Lernidee, the operator of the tour, said that the German company does try to train the Russian staff it is handed at the beginning of the tourist season. But old dogs (even if they are young) don't easily learn new tricks....or new mentalities... overnight. With centuries of oppression, current day challenges and a Debbie Downer DNA working against them, it is not, as our tour guide Valeri pointed out, in the Russian nature to be smiley or effusive--especially if not fortified by vodka.