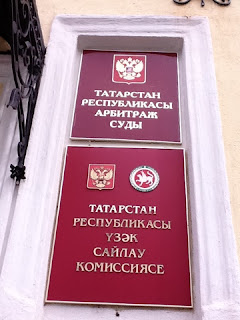 After passing the divide between Asia and Europe in the midst of nightfall, we arrive in the capital of the Tatar capital of Kazan one and a half hours late. However, as we have a full day's program here, the relatively short delay causes no distress.

Despite this being our first official stop in the European part of Russia, it feels like we are still in Asia....or perhaps the Middle East. Muslims, who first came to this city in 925 AD, live peacefully side by side with their Russian Orthodox neighbors, as their houses of worship, located in the city's massive Kremlin, compete for attention.

A couple of notable occurrences here in Kazan--I had my first complete conversation in Russian. It went like this:
Me: Kak Delat? (How are you?)
Androgynous Andrei the Local Tour Guide: XopaIIIo (Harasho--Good). Kak delat?
Me: XopaIIIo. 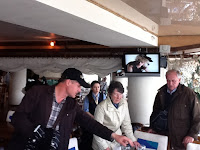 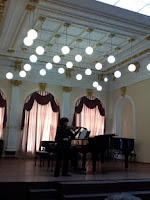 We were also regaled with music. At the retro Karavalle restaurant, we were treated to videos of Tom Jones from the 1970s and Madonna circa 1983. Afterwards, a visit to a music school provided the backdrop for a delightful series of impressive performances from young virtuosos. The 10-year-old violinist stole the show, but the other strings, the pianists, and the reeds were equally refined. It was lovely to sit back and listen to the classical music, without worrying about taking pictures or running the video camera. That said, I did capture a few snippets.

Finally, we saw the ubiquitous Lenin statue. In the Lenin slept here category, Kazan's claim to fame is a classic case of foreshadowing. The great revolutionary was expelled from Kazan University for his rebellious ways. 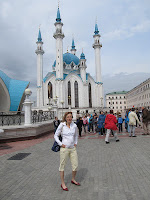 And now, ta ta Tatarstan. On to Moscow.