Posted by Laura Powell at 6:36 AM No comments:

Email ThisBlogThis!Share to TwitterShare to FacebookShare to Pinterest
Labels: Resume

...without the jaunty cap. Here are a few last-minute ideas for those shopping for the travelers in their lives.

The Power of Potatoes 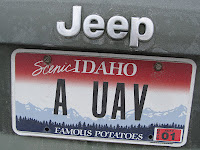 Given my love of the state of Idaho, I am always keeping my eye out, so to speak, for potato-related stories. So, I yam pleased to share this story with you, which details how tubers are contributing to airline safety. 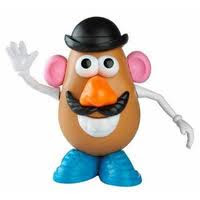 To briefly summarize, Boeing says it has been testing ways to "make it possible for passengers to enjoy more reliable connectivity using networked personal electronic devices in the air." (Boeing's press release writers must learn to pen prose in understandable English.)

At any rate, the new procedures Boeing has developed come, in part, via the humble potato. Just like Mr. Potato Head here, spuds mimic the human body in the manner they respond to electronic signals. So, the company's crack team of scientists bought 10 tons of potatoes, stuffed them into airline seats (no leg room required), and, in essence, microwaved them. When the potatoes didn't bubble and squeak after being pelted with electronic signals, all was deemed a success. Seems half-baked, but somehow this testing, according to a Boeing spokesman, allowed engineers to make sure that cabin-based signals are safe for the cockpit's communication and navigation systems. At the same time, the results are expected to ensure passengers using wireless devices on planes get (s)mashing reception.

As for the brave potatoes that chipped in for the experiment--they were donated to a food bank.

Posted by Laura Powell at 9:39 AM No comments:

Laura on TV: More Travel Gifts for the Holidays

For the procrastinators among us, here are some last-minute gift ideas I am profiling on NewsChannel 8 on Thursday. Be sure to check out this previous blog post for more inspiration. 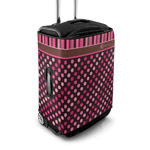 Dress up your suitcase with a CoverLugg. Fashionable coverlets made of form-fitting, hand-washable neoprene allow you to secure your bag, while making it stand out on the luggage carousel. What's more, you can choose from a whole wardrobe of patterns; opt for a CoverLugg featuring the logos of your favorite NFL, MLB, or NCAA team; or showcase your own monogram. $24.99 www.coverlugg.com

They say that the Aussie-designed Arvo iPhone 5 Case is inspired by the Sydney Opera House. The inside lining supposedly replicates the tiles of the iconic landmark. It don't know about that, but the design feature that does sing to me is the itsy-bitsy kickstand for easy viewing. And there's more. Arvo's satin matte finish is made to repel fingerprints and scratches. Aria convinced to purchase this stocking stuffer? It's $29.99 or less on Amazon.  www.stmbags.com

Have a little snorer in the back seat? Kalencom's Seat Belt Snoozer easily attaches to a seat belt shoulder strap to provide a cozy and secure comfort spot. $20-$30  www.kalencom.com

For adults feeling in need of a little support themselves, the portable BackJoy Posture Seat will help you sit up straight as you commute by car or airplane. $40
www.backjoy.com

Posted by Laura Powell at 9:17 AM No comments:

As a travel expert, one of the questions I get asked most frequently is "how do I pack?"  And now that airlines are charging for checked bags, the follow-up is "how do I stuff everything into a carry-on?" Now, if you are a woman with a shoe fetish traveling to the Great White North in December for 6 days, you likely believe the latter feat is impossible. But, if you read my answer to the first question posed, you will learn that you can travel to Canada for 6 days in the winter solely with a carry-on bag (plus a purse/tote).


To show that I walk the walk, let me detail what I am taking this week to the freezing cold (literally) city of Toronto. Above is my 22" Biaggi Foldable Carry-On ($229). Let's see what's inside.

It starts with my three pairs of shoes rule. You rarely need to have more than three pairs of shoes for any trip, and if you are a guy, you can probably get away with two. For women, my rule of toe is one pair of heels, one pair of comfortable flats (for walking) and one pair of sneakers (for working out). However, on this trip, I am flip-flopping from the norm. I am bringing a pair of Cole-Haan loafers, one pair of knee-high  flat boots, high-heeled ankle booties, and one extra item to boot (details in paragraph below). Normally, I would wear the bulkiest footwear on the plane, but in this case, I am packing both pairs of boots, and wearing the loafers on board.

In case I want to work out, I am bringing yoga pants and a built-in-bra athletic top. If I opt to go to the gym instead of using my iPad yoga app, I figure I can just do it in socks...or thongs (as in flip-flops, friends--yes, I know--breaking the three-shoe rule, but they are oh-so-tiny). Speaking of socks and lingerie--here's an accounting of what's packed in the suitcase. One bra, five pairs of socks, two pairs of tights, and six pairs of underwear. For sleeping, a pair of flannel pajama pants and a t-shirt.

During the day and into the night, my outerwear wardrobe, which is highly mix-and-matchable, will consist of the following:

1 dress
1 wool skirt
4 sweaters
2 pairs of pants
One short-sleeve shirt
One tiny purse
One pair of wool mittens and a hat
As aforementioned, two pairs of boots....

and a partridge in a pear tree.

Actually, no partridge, but other little odds and ends that every woman needs (sunglasses, vitamins, energy bars, etc.)  And that's the Biaggi bag.

Instead of a purse, I am carrying on a nylon expandable tote. The reason for the tote--I will need the extra room to stow the Canadian version of Monopoly I plan to purchase (thus adding to my 30-plus game international collection). Plus, I may purchase a few other odds and ends. For the outbound trip, though, the bag will be nearly empty. It will contain items that need to be whipped out at security, along with valuables (camera, iPad, phone) I don't want to stow in the overhead compartment. I will also toss in seeds and reads.

Because I will need a winter coat, I will wear that on board to save massive space (even though it is currently 70 degrees in Washington, DC). I will don my loafers (with socks so that I don't pick up yucky germs when I go all Shoeless Joe through security); a pair of jeans (with which I have to wear a normally-not-recommended belt, as these are low riders and ride low they will without some form of suspension); a lightweight shirt; and a fashionable Ralph Lauren sweater hoodie. I am also testing out the Robdechi hybrid scarf, which does septuple duty as a hat, a money belt, a passport holder, an eye mask, a neck pillow and a micro-fiber cloth to clean your iPad and iPhone (the latter of which you can conveniently store in one of the scarf's many hidden compartments).

Posted by Laura Powell at 4:00 PM No comments: