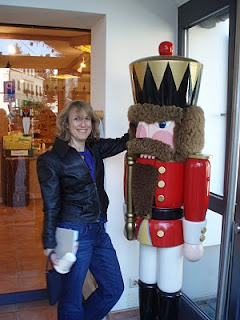 After you listen* to this segment on Berlin (@ 42 minutes in), and after you have read my earlier posts about Teutonic spa culture, you might be interested in heading to Germany. November and December are particularly festive months to go, as Christmas Markets, complete with nutcrackers, gluhwein, and lebkuchen, dot the country. Dresden hosts the country's oldest Christmas Market, Nuremberg hosts the most famous, and Berlin hosts, well, the most. The capital city hosts about 60 markets in various neighborhoods. And yes, Virginia, there's even a Hanukah Market (held in the courtyard of the new and acclaimed Jewish Museum).

A few other notes for folks heading to Germany:

--Outside of the major cities, it can be difficult to use major credit cards. Many stores and restaurants don't accept plastic from non-European banks. So, bring cash.

--As I traveled through Saxony and Bavaria, I found still/flat bottled water hard to find. If you prefer your water non-carbonated, you may have to drink it from the tap (a perfectly safe option, by the by, although some waiters will look at you funny should you order it that way).

--If you want your hair to look smooth and shiny, BYO conditioner. I didn't find this amenity at any of the 12 hotels I visited during my recent trip.

*If the link takes you to the main page of the ATW website, go to the Archives for the 10/28 show.
Posted by Laura Powell at 12:30 AM No comments:

Email ThisBlogThis!Share to TwitterShare to FacebookShare to Pinterest
Labels: Destinations, Holiday Travel, In the Media

The Naked Truth: Undressed to the Neins Part II

The German spa experience is quite different from its American counterpart. Across the pond, it’s about taking the waters, relaxing, and invigorating all of one's senses (to wit, many German spas actually have concert halls where one can enjoy the sound of music in the quest to lower one's blood pressure. Quite civilized, that). Pampering and prissy treatments are verboten. Also, most spa facilities are not located within hotels or resorts, but are community centers for all who seek to unwind. 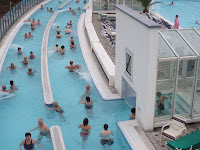 That preamble out of the way, let us return to our tale of the Naked Spa of Bad Fussing. I am traveling with a quintet of women of a certain age, including a statuesque guide of German and French Guianan descent. Given her height, her exotic skin color, and her status as an ex-model, she diverts the attention of all wandering eyes. Therefore, I suppose she is also acting as our bodyguard. Ah, Isabelle, I shall always love you.

We enter a facility that seems somewhat antiseptic, like a sanitarium of yore…not to imply that I intimately know what a sanitarium of yore looks like. (This reminds me of a recent conversation with someone who had taken a tour of an insane asylum back when political correctness had not invaded our language. Said “tourist” mentioned her guide was a schizophrenic. To which I replied, “At least you got both sides of the story.”)

Apologies for the digression. I know you are probably sitting at the edge of your seat waiting for the Naked Spa story. And naked truth be told, we were sitting at the edges of our seats naked in the honey-baked sauna. But I get ahead of myself.

The first clue that something might be amiss was in the changing area. While our little group changed into our bloomers (swimsuits were required for the pool area), we noticed men...and children...walking right on by. Here we were, buck naked (ring a bell, Seinfeld fans?), and parades of Germans were marching past. Enjoy the cabaret, mein herrs.

To warm up, three of us took part in a water aerobics session, set to a tune that was a fusion of bad 1980s Euro-disco (I know, that's redundant) and an alpine yodel. Next, our intrepid quintet made its way to the sauna garden. There, Isabelle knocked up the Sauna Meister. Apparently, Sauna Meister is a full-time job in Germany ("...and what do you want to be when you grow up, little Helmut?"). The Sauna Meister gave us the skinny on Naked Spa activities (in the name of journalistic accuracy, I should mention that the facility was actually called Thermae I). 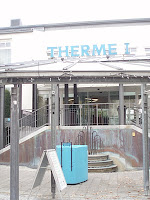 The first sticky situation reared its head as we entered the Honegspeeleng (the honey sauna). This was the point at which we fully realized we not only had to lose our outerwear, but our towel wraps as well. Frankly, there was no choice. With the sauna room packed cheek to cheek, it became quite apparent that we would poke out like sore thumbs (or something) if we remained clad.

Thus we sat, a co-ed group of 40 naked people, with nary a washboard ab in sight. Within minutes, the Sauna Meister cometh. For those trying to picture the scene (and please leave me out of it if you are), the Sauna Meister was not naked. Nor was he wearing a Speedo, so his status as a bearer of washboard abs is in question. No, it was a fully-clothed Sauna Meister who came in bearing pots of honey. He passed them out and everyone proceeded to slather themselves and their neighbor. Isabelle advised we naifs that the honey should not be rubbed on die scheide.

After the honey mixed with sauna-induced sweat, lo and beehold, we were all detoxified. After leaving the sauna, the next step was to cool off with a naked foot bath. I had the pleasure of taking mine next to an incessant hummer (to clarify for readers of the Urban Dictionary, please note that said man was merely singing without words).

As for the rest of the afternoon, we got naked again, yadda, yadda, yadda, and then we left the premises. Seriously, after being naked for so long, it blurs altogether.

Now, lest this scare you off a spa trip to Germany, be advised that all spas aren’t naked spas. In fact, at the next place we visited, the Wellness-Hotel Sonnegut in Bad Birnbach, swimsuits were de rigueur. And interestingly enough, the bodies in those swimsuits were much more fit than the naked bodies at Thermae 1 (not that I was looking, mind you). Go figure.
Posted by Laura Powell at 8:17 AM 2 comments:

The Naked Truth: Undressed to the Neins-Part 1

In retrospect, it all started with a conversation I had two days before leaving for Germany. During said conversation, a friend revealed a secret past that included a nude streak in some California canyons back in the late 1960s (you know, the Age of Aquarius). As a member of a slightly younger and more prudish generation, this revelation left me feeling a bit disconcerted. Little did I know that just weeks later, I would be the one letting my hair down and letting the sunshine in (so to speak).

The foreshadowing began in Berlin. As I was on a mission to investigate the remnants of the Cold War in the once divided city, I visited the DDR Museum, devoted to all things East Germany (DDR is short for the Orwellian Deutsche Demokratische Republik). 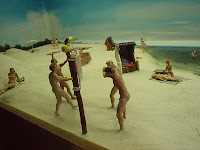 Among the exhibits was one on naked tourism. Yep, those East Germans may not have had any political freedom, but they sure let it all hang out on vacation. The exhibit was marked by what Americans would deem illicit photos (full frontal images of an unclad Mom and Dad swinging bare naked Junior through the sea) and a lovely diorama depicting all of the things East Germans did on nude beaches (I will spare you the details).

The next harbinger of things to come happened in Bad Kissingen, when I was given a rubdown with hot, oily balls by Stefan, a masseur half my age (you do the math). Mind you, I've been kneaded by many a male massage therapist, including Dan the Man the Romanian Rubber and Bud Light. But the combination of Stefan's youthful appearance and the lack of a modesty towel or sheet did give me pause.