That's right. Following on the heels of last year's Just for Summer: 51 Great ....series, where USA Today asked me to write about the best place to spot wildlife in the nation's capital*, I received a new challenge for 2012. "Hey, Laura," said my editor at USA Today, "this year, our topic is 51 great beaches. You are our DC expert. You can't do anything in Maryland, nor Virginia. Your mission is to find a beach within the confines of the 68.3 square miles of Washington, DC." Please note that said editor said this with a straight face as she sat in USA Today HQ in McLean, VA, just minutes from the District border.

At any rate, here is the result.

District of Columbia
Let's face facts: Washington, D.C., doesn't have a beach. But the city is finally capitalizing on its Rodney Dangerfield of rivers, the Anacostia. Yards Park, just a mile and a half from the U.S. Capitol, has a kid-friendly fountain and wading pool, open spaces and an old-fashioned boardwalk. Festivals and Friday night concerts bring crowds out in force. Early mornings are perfect for strolling on the quiet waterfront, watching rowers on the river or relaxing in wooden chaise-lounge chairs. yardspark.org
— Recommended by Laura Powell, travel journalist based in Washington, D.C.

Email ThisBlogThis!Share to TwitterShare to FacebookShare to Pinterest
Labels: DC, In the Media, USA Today, Washington 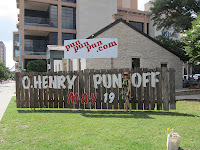 2. What is Not a Pun
If you are talking about railroads, “you’re off track” does not give berth to a pun. Why? Because track in the cliché refers to a railroad track. The usage of the word must differ from its original meaning.

3. A Pun Can Include a Set-Up
To wit, when paired off in Punslingers with the topic of Politics, No Names (seemingly a good category for me until you discover my opponent grew up in DC as part of a politically-connected family and currently serves as a political pundit for a major DC media outlet), I was tapped out after about a dozen rounds. My tendency was to play off specific words/phrases--we’re setting a president here/Do you C-N-N anyone out there? (a holla to my alma mater). On the other hand, my oppunent used a stalling technique to develop a story that led up to a pun-chline.

Had I employed this technique, I might have issued the following in order to stay in the game:
--Remember that character from Cheers who used to sit on his barstool drinking beer all day? Well, I suppose if they call Boston the Red Sox Nation, they could call Cheers the nomination.
BTW, I was DQ’ed when I mentioned that my 80-year-old boyfriend had electoral dysfunction because electoral had already been exercised. Rather anti-climatic.

4. Let’s Keep It Clean, People
Use of coy double entendres is fine (as in electoral dysfunction above). But anything too blatant is met with derision at the Pun-Off, which, after all, is a family affair. 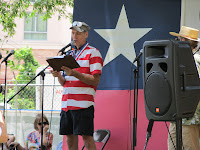 5. There's No Apologizing in Punditry
In the words of Gary Hallock, punmeister extraordinaire and emcee of the Pun-Off, a lovely pun means never having to say you’re sorry. If you have to apologize for a pun, it probably isn’t worthy. Hallock notes, “When someone adds ‘no pun intended‘ to a quip, I say, ‘none taken’ because it couldn’t have been much of a pun in the first place." 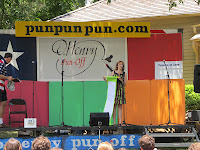 After reading my punditry on the written page after the fact, one judge, while noting its brilliance (!), suggested I simply had too many puns (63) in a 120-secord monologue. As a result, there was no time for the pungent, pregnant pause in the spoken version, quite necessary for a complex pun to sink in.

7. Stick to the Basics
It helps to pun in recognizable English. Riffs on familiar references--like States or Cheese --won the day. My piece was on Russia, or more specifically, the Soviet Union and its empire. Therefore, some puns (Soyuz, Mir-ly) may have been unrecognized or misunderstood, while other wordplay (he was good at his korbut a little off balance, a Sista‘ Solzhenitzyn moment) may have been a bit dated.

8. Brilliant Writing Doesn't Always Translate to Oral Pun Linguistics
Written punditry is different from oral punditry. He wouldn’t steppe up to the plate, when we can stair at it on the page, clearly shows punditry on the Russian theme. However, spoken, it just sounds like step. Same goes for finnished.  And Y’altallinn you, which cleverly combines Yalta and Tallinn in one fine pun, doesn’t pact the same punch in spoken English.

9. Sometimes you can be too punny for your own good.

Coincidentally, this Hotel F and B article about messin' with Texas breakfast comes out during the same weekend I am competing in the National Pun-Off in Austin.
Posted by Laura Powell at 9:36 AM No comments:

Living in a Material World


It’s the summer of fashion. In New York, in Denver, and in Vienna, special exhibits and events spin yarns about the history of fashion and its connection to the world of art. Even non-fashionistas will cotton to the presentations.


Starting May 10, the Metropolitan Museum of Art’s Costume Institute stitches together common threads from the material of two famous Italian designers. Schiaparelli and Prada-Impossible Conversations focuses on the correlation between two influential, eccentric, and innovative female designers of eras past and present.


The exhibition showcases more than 100 designs and accessories by Elsa Schiaparelli  (who worked mainly in France from the late 1920s to the early 1950s) and by Miuccia Prada (late 1980s to the present). Signature objects by both designers will be arranged in seven themed galleries: "Waist Up/Waist Down," "Ugly Chic," "Hard Chic," "Naïf Chic," "The Classical Body," "The Exotic Body," and "The Surreal Body."


In conjunction with the exhibit, Kimpton’s 70 Park Avenue Hotel has a Vintage to Vogue package including a room night, two tickets to the exhibit, and two Italian-inspired cocktails upon arrival. The deal starts at $309 a night, excluding taxes, and runs through August 19, when the exhibit closes. For details, visit http://www.70parkave.com/ and use the code PVOGUE. 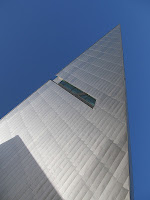 The Met notwithstanding, the country’s biggest fashion exhibit this year is Yves Saint Laurent: The Retrospective, making its only U.S. appearance at the Denver Art Museum (DAM). The fabric of The Retrospective features a stunning selection of 200 haute couture garments along with numerous photographs, drawings, and films illustrating the arc of Saint Laurent's career from the late 1950s to the early 2000s. 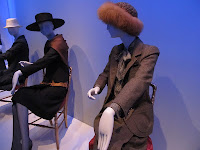 Yves Saint Laurent (YSL) was the first designer to use menswear as an inspiration for women's clothing--from the safari jacket to the tuxedo. The 1960s fashion innovations both reflected and sparked the growing power of women during that decade. 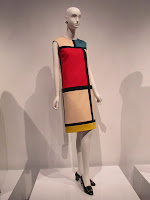 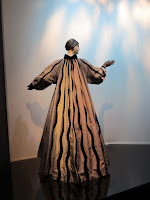 The designer was also influenced by exotic costumes from the Maghreb, Russia and China. Artistic influences ranged from Degas to Picasso to Mondrian.


Many fashion snobs are hemming and hawing about the fact that this show, which was the talk of the town in Paris a couple of years ago, ended up in Denver. To paraphrase YSL representatives, it seams (sic) that DAM sewed it up simply because it made the request. Plus, the museum does have an extensive collection of European and American 20th Century design and textiles are a growing focal point. So, the Saint Laurent show was a natural fit.


There’s a great deal more to do in Denver than the DAM. So, spend a night or two with one of a dozen hotel packages featuring VIP front-of-the line tickets and other special amenities. Visit http://www.ysldenver.com/ for full details on Yves Saint Laurent hotel packages. The show only runs through July 8, so book your tickets to Denver soon.

Meanwhile, across the Atlantic, fashion struts its stuff in Vienna's Museum Quarter. The city's Summer of Fashion, taking place from mid-June through mid-September, is filled with  exhibitions, fashion shows and markets, and exclusive tours weaving the worlds of style and art.


The flagship exhibit is "Reflection Fashion" at the Museum of Modern Art. But other Viennese institutions are jumping onto the catwalk as well. For example, The Architecture Museum is hosting city tours on Architecture, Fashion & Design, while the Natural History Museum is actually staging a fashion show.  And the Vienna Museum is offering exclusive tours through its extensive fashion collection, which is generally not open to the public.


For more details on these stylish goings-on, check out the May 10 edition (@ 44 minutes in) of Around the World.