As my loyal readers know, I like nothing better than a good pun. The following conversation took place on my Facebook page this week. It should leave you with your filly of horseplay.

So, I am in downtown Washington, wearing, quite appropriately as it develops, cowboy boots and jeans. Heading to a 'do hosted by the Austin CVB when suddenly, I find myself amidst a sea of horse's asses. Neigh, not the standard-issue DC night-mares...but literally horse's asses, complete with thoroughbreds attached. Lo and behold, the International Horse Show is here. I believe the event's patron saint is Saint Thomas Equinas.

Comments:
PB: Clever, Laura!
KR: And you have the horse sense to have unbridled joy over this.
Me: I'm furlong unstable, today. C'mon, people, make me feel better and shower me with horse puns. Let it rein.
DM: So, there really is a pun gene and I am missing that part of the helix...I cantor think of a single one.
Me: There's a flicka of hope for you.
CM: I'm so glad your dressage was appropriate for the occasion. But don't get carriaged away now.
Me: Thank you, everyone, for your feedbag.

Want to jump into the ring? Be a palomino and pony up some of your equinist punditry here.

Posted by Laura Powell at 10:14 AM No comments:

My most recent appearance on NewsChannel 8 features fall getaways and odd election travel tie-ins.
Posted by Laura Powell at 9:21 AM No comments:

This time, I am talking about the real one, and not the one recently won by Teddy Roosevelt at Nationals Park. If you live anywhere in the United States, it is difficult to get away from the race between Obama and Romney, especially with less than a month to go before election day. But imagine the plight of those who live in and around Washington, DC. Politics is always ubiquitous, and if it's possible, even more so during the month before a presidential election. To boot, Virginia is in play, which means that even in deep blue DC, we are being pelted with ads from the right, from the left, and from those central players involved in the game thanks to Citizens United.

So, what's a Washingtonian to do? My advice is to get away and avoid TV. Fortunately, in these Mid-Atlantic parts, October is the perfect time to do just that. After all, it's fall foliage season and Virginia Wine Month, all in one stellar month.

During the past decade, Virginia has become purple in more ways than one. In addition to swinging Obama in 2008 (despite having a state leader Rachel Maddow dubs as "Governor Ultrasound"), the state has mauved to the center of the East Coast wine movement. With more than 200 wineries, the Old Dominion is #5 on the state list of wine production, a statistic that would make one Thomas Jefferson very proud. Throughout October, Virginia wineries and vineyards celebrate the grape every weekend with tastings, harvest festivals, live music, and art shows. Check out www.virginiawine.org for a full calendar of events from around the state.

Next up--leaf peeping. October is the month for fall color in Virginia, West Virginia and Maryland. The best color starts mid-month in the mountainous regions of this stately trifecta. For a status report on  Virginia's non-partisan colors, call (800) 424-LOVE. For West Virginia updates, call (800) CALL-WVA.  Maryland's number is (800) 532-8371.  Finally, if you want to venture even farther, the U.S. Forest Service hotline reports on foliage throughout the country at (800) 354-4595.

Fully sated by nature's bounty, head back to home in November and remember to vote.

Posted by Laura Powell at 8:31 AM No comments: 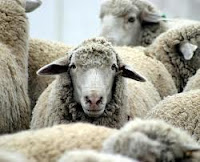 The 2012 rendition of the festival takes place October 11-14. Details are available at www.trailingofthesheep.org.
Posted by Laura Powell at 6:18 AM 1 comment: