This piece originally appeared in The Washington Post Magazine on September 21, 2014.

Posted by Laura Powell at 8:30 AM No comments:

On the day I was heading off to Georgia, I reported on my fortnight in Iceland. Here's the segment that aired on Around the World Radio in California on October 9. To accompany my dulcet tones, here are a few images. Please note: The segment cuts out about seven minutes in, but we reconnect after the hosts ramble for two minutes.

Email ThisBlogThis!Share to TwitterShare to FacebookShare to Pinterest
Labels: Iceland, Laura on Radio

To clarify before we count down, we are talking Georgia of Eastern Europe/west of Russia--not south of the Mason-Dixon Line.


1. Why is Georgia called Georgia? There are three theories.

--St. George is the patron saint in these parts.
--Some accounts I see online says it comes from the Perisan word gurj ...meaning wolf.
--I tend to believe my lovely guide, Tamara Natenadze, who says it comes from the Greek georgios, meaning land of agricultural or cultivation. She says Greeks came to the area in the first century before Christ and were surprised to find such an advanced culture.... 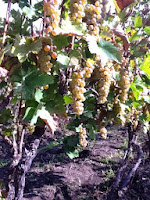 2. ....which included wine production. Georgia has an uninterrupted 8,000-year history of grape cultivation, making it the oldest wine-producing region in the world. About 535 varieties of grapes are grown here.

3. Georgians, by the by, called themselves 'Kartvelebi'...derived from the pagan god Kartlos, said to be the father of all Georgians.

4. King of Queens: King Tamar was a woman who ruled Georgia during its medieval Golden Age. 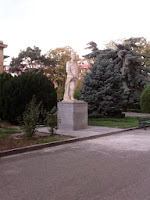 6. The town where Joseph Stalin was born, and where a self-aggrandizing museum to the tyrannical dictator is located (opening date--1957), is called...appropriately... Gori. 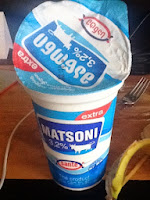 8. Georgian Cultures: They eat lots of yogurt here, called matsoni. In places, it is made with the milk of water buffalo.

9. Dannon's 1977 ad featuring Georgian centenarians was the first US commercial shot in the former Soviet Union. It put both Georgia and yogurt on the map....although I highly doubt locals opt for the commercial brand.

Posted by Laura Powell at 3:12 AM No comments:

Email ThisBlogThis!Share to TwitterShare to FacebookShare to Pinterest
Labels: 9 Things, Republic of Georgia

I chatted about Airbnb, taxes and regulation (oooh, sexy) on today's Let's Talk Live in Washington, DC. Below is the promo and here is the clip of the segment. Let me know what you think.

#tunein with @dailysuitcase to find out things you should consider before using #airbnb to #rent out your #home. pic.twitter.com/9r0zzMwvxn
— LetsTalkLiveDC (@LetsTalkLiveDC) October 6, 2014

Posted by Laura Powell at 7:45 AM No comments:

It's a busy week of media appearances. Today, I head over to WJLA-TV studios to do a Let's Talk Live segment about Airbnb. On Thursday, I report on Iceland for Around the World Radio in California. In the interim, I need to polish off an article about private schools for The Washington Post. Whew.

If you aren't quite as busy, feel free to peruse these pictures of Iceland.

Simply put, Iceland is one of the most stunningly beautiful countries I have visited...and I have been to more than 50. It's raw, it's rugged and it's dramatic. The next several blog posts will be filled with images of scenic wonders (waterfalls, geysers, glaciers, craters and pseudo-craters); livestock (sheep and horses); and village scenes that seem to come straight out of the imagination. Oh, and did I mention the Northern Lights? 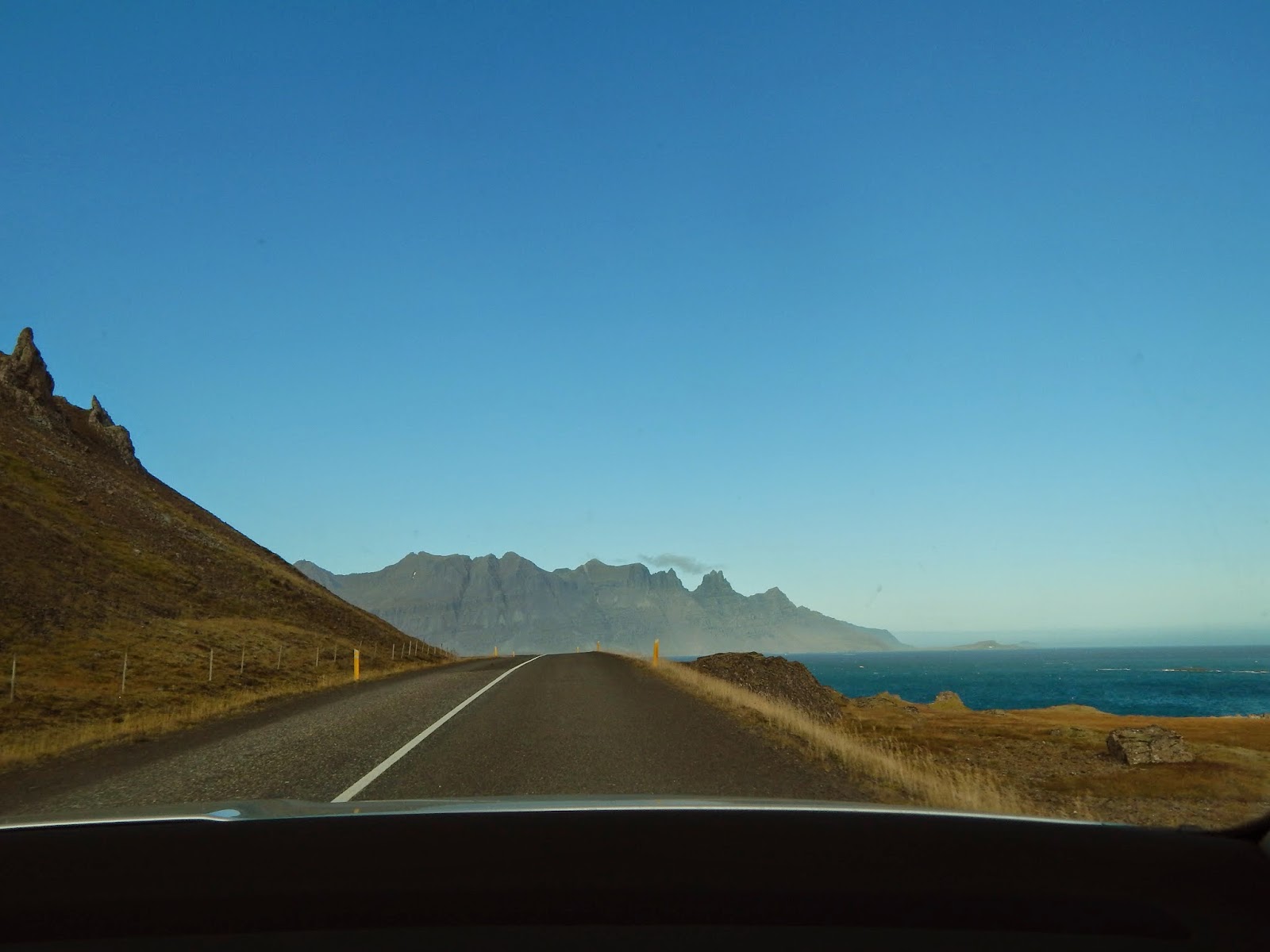 The Ring Road circles the island of Iceland, traveling through countryside and fjords,and past countless waterfalls, glaciers, and volcanoes. In all, it's more than 800 miles long. 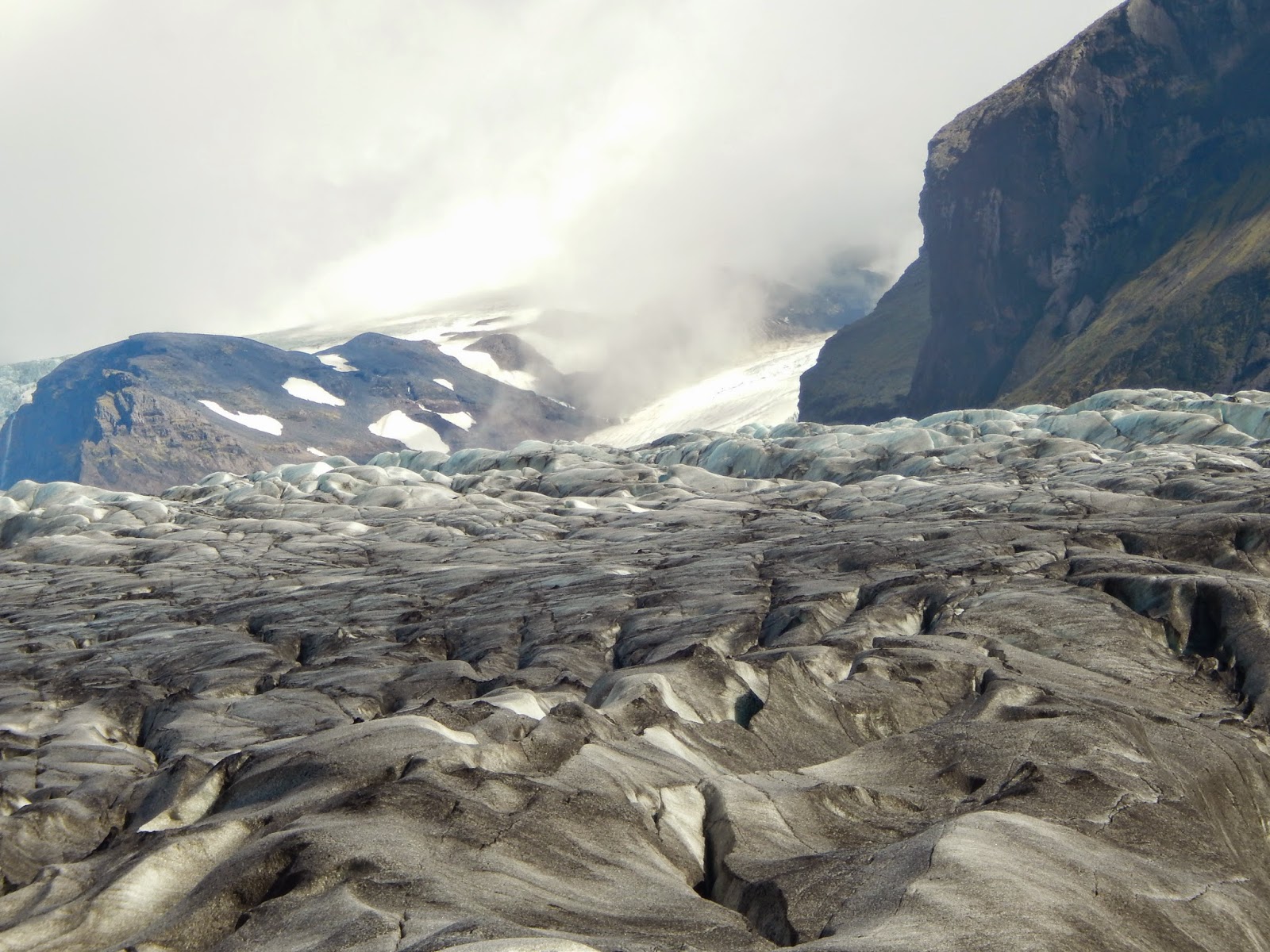 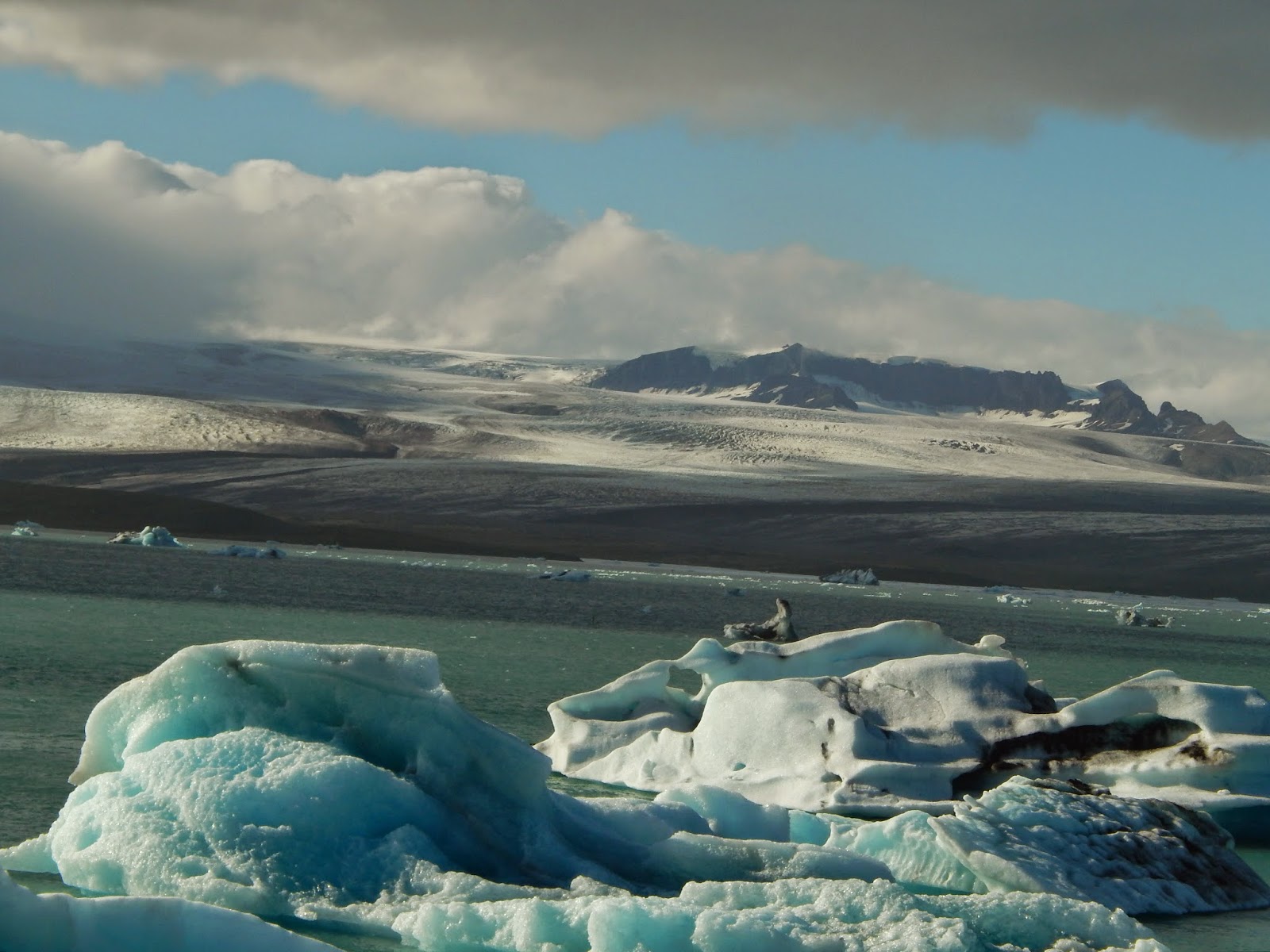 Vatnajökull National Park is home to the largest glacier outside of the polar regions. Arrive in Skaftafell and book a tour to walk on the glacier...or just amble around it. Skaftafell is four hours east of Reykjavik.

Jokulsarlon Glacier Lagoon is actually the result of global warming (yes, Virginia, it exists). Located near Vatnajökull  this deep lake is filled with icebergs appearing to be blue. You can take a boat trip around the ice, or opt to get closer via a Zodiac. 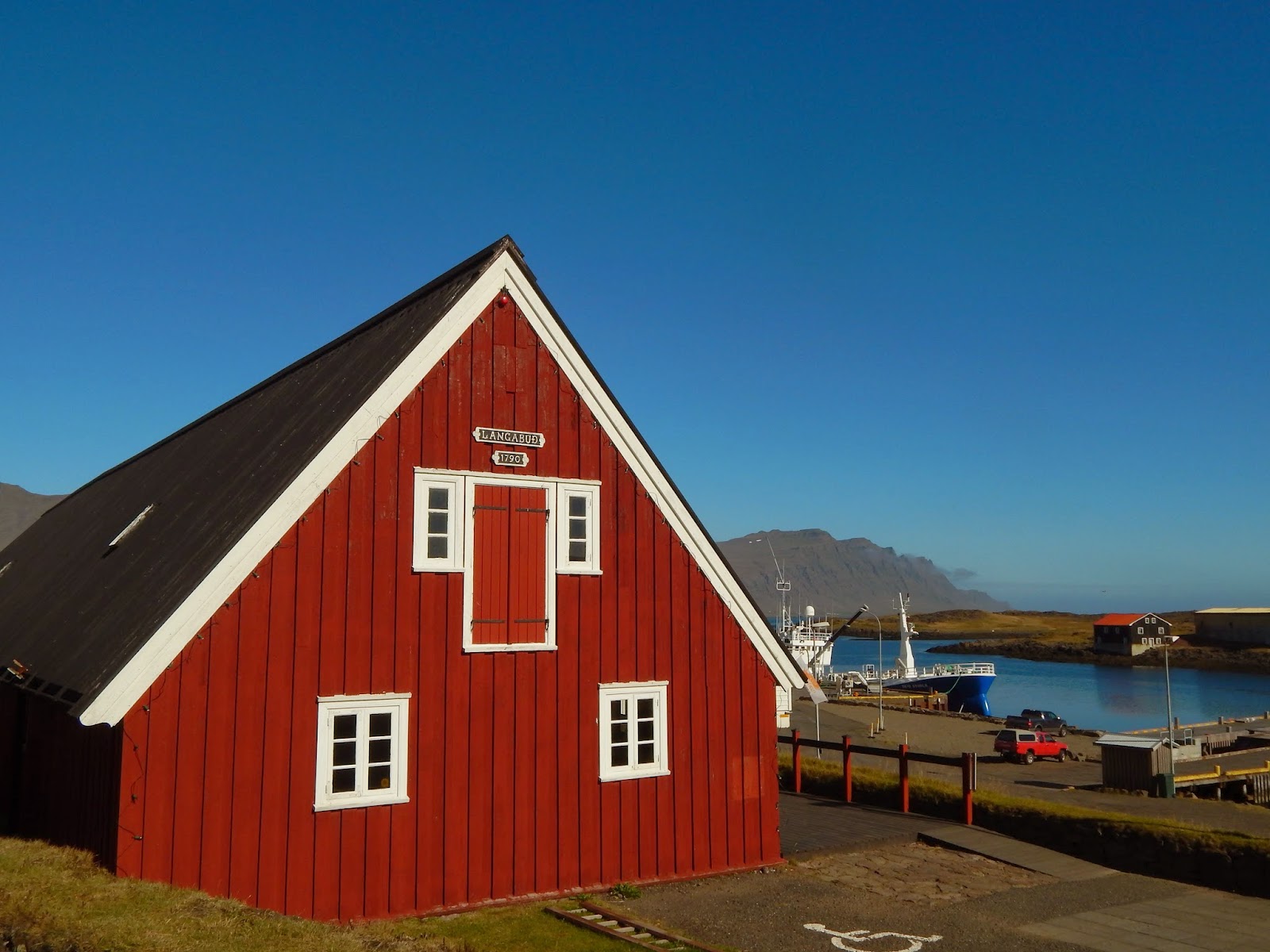 These last two shots are designed to tease you into coming back for more. Djúpivogur is a charming town in the Eastern fjord region, and the place where I found my Monopoly game (and a designer leather dress and a reindeer bracelet).

Below, one of many images of the Northern Lights, as seen around Lake Myvatn on the night of major solar flare activity. Note--this picture was taken with a Nikon Cool Pix L-820--not a fancy camera. No tripod was used. 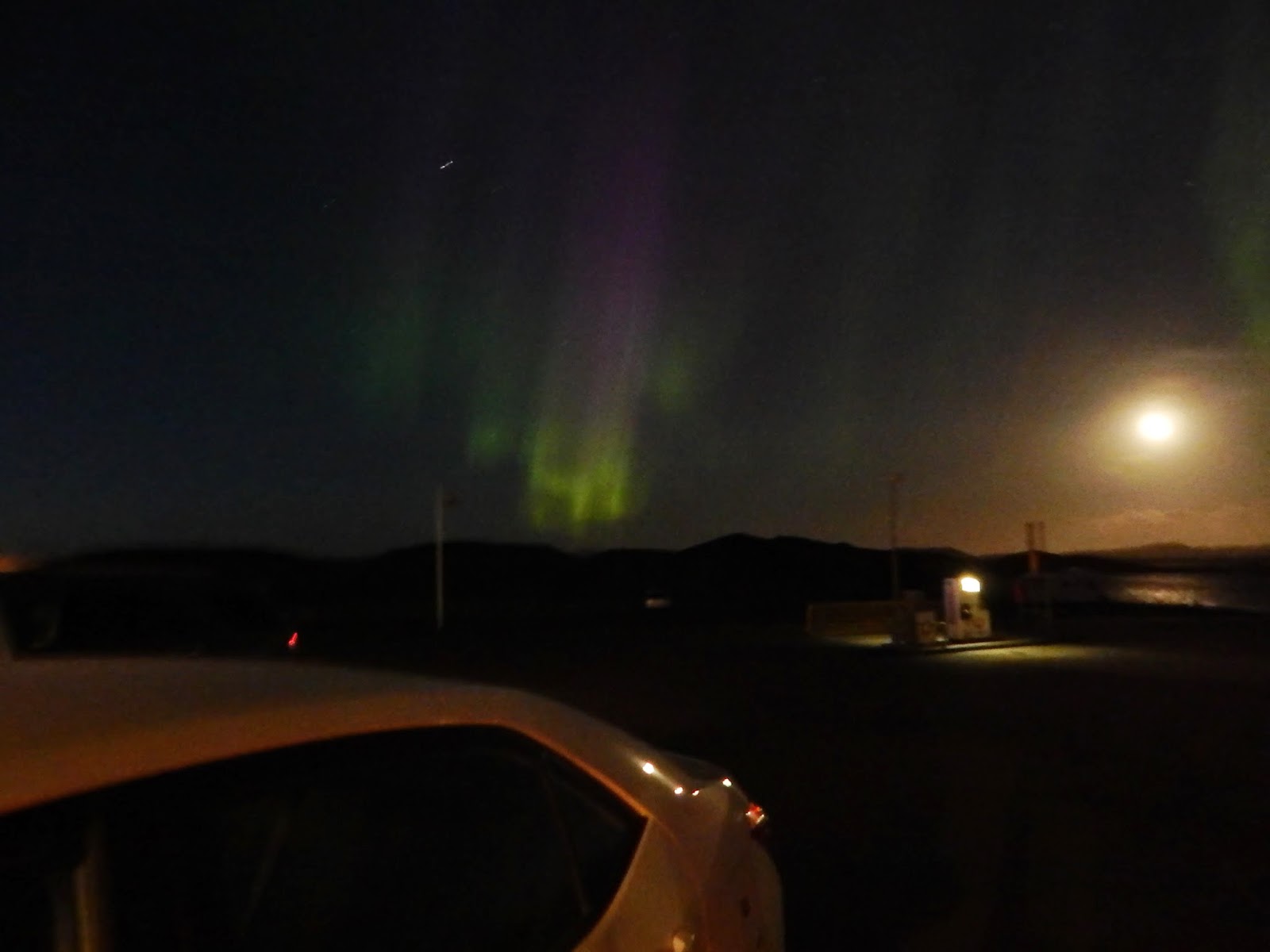 For more information on Iceland, go to www.visiticeland.com.
Posted by Laura Powell at 8:00 AM No comments: