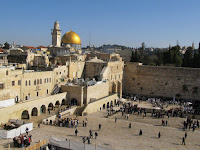 As I will be referencing various place-related syndromes in some of my pieces on mental health and travel, here’s a brief primer. More in-depth features on each specific syndrome will be written soon--please grant me a bit of writer’s asylum.
The big kahuna is Jerusalem Syndrome. The malady is reported to impact some pilgrims to the Holy City, and is characterized by religiously-themed obsessive ideas or delusions (thinking one is the Messiah or feeling the need to shout verses from the Bible), or by psychotic behaviors ranging from ritual bathing to compulsive fingernail and toenail cutting. Although it may affect those of any religion, Scandinavians and American Protestants seem particularly susceptible. Some psychologists say Jerusalem Syndrome is a unique illness, while others say it is merely a symptom of pre-existing mental conditions.
If you are on a tour of Jerusalem, beware of the following behaviors from members of your group, as cited by one Dr. Gregory Katz in the British Journal of Psychiatry in 2000.

Meantime, Paris Syndrome is a transient condition, most often suffered by the Japanese, during visits to the City of Light. It was first widely reported in Nervure, a French psychiatric journal, in 2004. About 20 Japanese tourists a year are affected by the condition, which is characterized by delusions, hallucinations, anxiety and sweating, among others. According to the authors of the Nervure study, Japanese are particularly prone due to language barriers, culture clashes, travel exhaustion, and a pre-idealized image of Paris, to which the reality does not mesh.

Finally, Florence Syndrome, better known as Stendhal Syndrome, is a condition named after the 19th-century French author, who was overcome by the beauty and breadth of Renaissance masterpieces during a visit to Italy. Nowadays, what is considered a psychosomatic condition is marked by symptoms including rapid heartbeat, weak knees, dizziness, fainting, and confusion. It is said to happen when individuals are exposed to art that is profoundly alluring or uncommonly comely. But given that the affliction is primarily the bane of middle-aged British women, perhaps it is exposure to, ahem statuesque exposure, that sets off such carnal responses.
Posted by Laura Powell at 8:00 AM No comments:

The long-awaited clip from the WUSA-TV segment in December.

Email ThisBlogThis!Share to TwitterShare to FacebookShare to Pinterest
Labels: In the Media, Travel Advice, Travel Television

It seems we live in an age of specialization. The jack of all trades and mistress of many is increasingly undervalued. To wit, even though I have covered travel for 25 years (I started very young) and I know a lot about a lot (if I do say so myself), it's not enough. Seems expertise isn't valued unless billed very specifically--family travel expert; tennis travel ace; hotel industry hot shot; nude travel maven, etc. I have frequently covered all of the above (although I suppose it is somewhat oxymoronic to "cover" nude travel), and likely have far more knowledge than many of the so-called experts with blogs devoted to a particular proposition. Nonetheless, my expertise is left under-appreciated.

Finally recognizing that you can't fight City Hall (despite the best efforts of Occupy Wall Street),  I decided the beginning of the new year was a fine time to establish a singular specialty. Not so easy, my friend, as  much of the travel world is plucked over. But then, after a spate of visions about phenomena like Stendhal's Syndrome, Paris Syndrome and Jerusalem Syndrome, something clicked.  "Why," I said to myself (not that I really talk to myself...okay, I do), "maybe I'll become an expert in travel and mental health." After all, people frequently say I'm crazy. Plus, is it delusional to explore why sojourners so often succumb to the artistic beauty of Florence with hallucinations and quivers? Or why American and Scandinavian pilgrims (usually Protestant, according to the research) turn into raving lunatics in Jerusalem? Or why Japanese people are especially prone to depression in Paris? I will explore all of these issues in later columns, mes amis.

But let's start at the very beginning, with a phenomenon known to travelers since time immemorial. Said phenomenon--Travel Stress Syndrome.  To intelligently discuss, let me refer to a "Travel Mental Health Checklist-Travel Stress" developed by the International Association for Medical Assistance to Travellers (it's based in Britain, hence the "ll").  Parenthetically, but without parentheses, IAMAT also provides a travel checklist for psychosis, but I realize it would be crazy to start with that.

So, here was go. As we all know, travel is always stressful to some extent. Even the most experienced traveler gets annoyed at the airport; is flummoxed by foreign fare; and becomes rattled by reversals in routine. And certainly, no one is insulated from culture shock (or culture schlock, as the case may be for travelers heading to Disney World or shopping areas around any major tourist attraction).

According to IAMAT, travel often exacerbates mental health problems. And even those with no prior experience with mental illness could develop panic attacks, anxiety, et al, due to travel stress. In order to circumvent such mental ills, IAMAT offers the following suggestions:

1. Before you leave, assess your travel plans and change them if needed to minimize your stress levels.
Dr. Laura's interpretation (no, not that Dr. Laura)   Leave yourself plenty of time to get to the airport; don't overschedule your days; and don't try to see too much in too short of a time.
2. If your expectations are not met, find non-confrontational solutions to improve the situation.
Dr. Laura's interpretation: Don't yell at the airline agent o the front desk clerk; cast aspersions at your neighbor on the aeroplane; or pick a fight with your tour guide.
3. Take the time to enjoy the people, new sights, sounds, smells and experiences when in country. Be present and try to live in the moment. Know your mental and physical limits.
Dr. Laura says, "Amen, IAMAT."

IAMAT also offers suggestions on dealing with more specific issues, ranging from culture shock to the aforementioned psychosis. We shall check in with some of those issues in upcoming posts.

Posted by Laura Powell at 2:10 PM No comments: