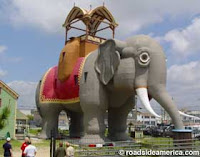 This article originally appeared in the May 15th Washington Post Travel section.

What do you get when you combine a colossal pachyderm, a Wild West rodeo, miles of beaches, a classic American entertainment mecca, and a dash of revolutionary history? New Jersey, for shore.

While the Garden State is America’s fourth smallest, you’d never know it by the diverse attractions within its borders. High climbers can scale the Appalachians, while high rollers can weigh their odds in Atlantic City. There are 130 miles of shoreline, plenty of seaside amusements, and eco-extras for the hikers, bikers, and birdwatchers among us. And, as it is all within a four-hour-or-less drive from Washington, getting to New Jersey’s wild side can be done on a tankful of gas.

During the summer, many city dwellers are attracted to New Jersey’s shores. Beach towns run the gamut, from the vintage Victorian village of Cape May (the entire place is a National Historic District) to the glitz and glamour of Atlantic City. In between are places like Seaside, Point Pleasant Beach and Wildwood, whose boardwalk amusements are stuff of legend.

Atlantic City has plenty of offerings for adults, including almost a dozen major casino resorts, showrooms, spas, and stellar cuisine. But like any coastal community, the A-C’s family-friendly nature can’t be denied. What kid wouldn’t love the midway games and rides dotting the country’s most famous boardwalk? The area’s family-friendly attractions run the gamut from an aquarium to a lighthouse to Lucy. Lucy the Margate Elephant, that is. The six-story elephantine structure hangs out just south of Atlantic City and is the only National Historic Landmark shaped like an animal. The wood and tin behemoth is a classic example of eccentric Victorian architecture circa the late 1800s.

Another New Jersey novelty is the Cowtown Rodeo in Pilesgrove. It’s the longest running Saturday night rodeo in the country, dating back to 1929.

Speaking of times past, don’t forget that New Jersey was the Crossroads of the American Revolution. The state has more than 500 farmlands, hillsides and homesteads that played some part in that war. Some of the prime sites include Morristown National Historical Park (where Washington and company endured the war’s long winters) and Monmouth Battlefield State Park. While others are commemorating the Civil War this summer, Yankee Doodle Dandies can participate in June’s Battle of Monmouth reenactment, remembering the largest artillery battle of the American Revolution. Washington Crossing State Park, where the boys landed after fording the Delaware River, was originally preserved for its historical significance. But today, it is also a popular place due to miles of trails, wildlife habitats, and a plethora of bird-watching perches.

In fact, New Jersey’s wealth of wilderness and wetlands is often a surprise to the out-of-stater. There’s Lake Wawayanda, a prime place for fishing, canoeing and boating. A twenty-mile stretch of the Appalachian Trail runs through the park. Outside adventurers might also ramble over to the Meadowlands. Say what? That’s right, the Meadowlands is an ecotourism paradise. The thriving marshes and vast recreational opportunities along the Hackensack River are the best kept secret of the 30.4-square-mile Meadowlands District. Visitors can take a guided tour of the wetlands by boat, witness wildflowers or warblers, or explore tidal creeks and marshes by canoe.

For more ideas on New Jersey’s panorama of authentic, iconic, and original attractions, go to www.visitnj.org.
Posted by Laura Powell at 8:31 AM No comments:

Email ThisBlogThis!Share to TwitterShare to FacebookShare to Pinterest
Labels: Destinations

It seems I am addicted to books that discuss the evolution of things. I’m not speaking in Darwinian terms (although I have been to the Galapagos Islands). Rather, I love books that explore the origins of Spam, or Twinkies, or the Yugo.

As I think back, I believe I may have discovered this gene in my reading DNA thanks to The Panama Hat Trail by one Tom Miller. More than a mere exercise in travel journalism, Miller, in my humble opinion, stages a coup d’tete (sic) in weaving the tale of the Panama Hat, which actually has its origins in Ecuador (home of the aforementioned Galapagos). While he does not discover giant tortoises sporting jaunty straw hats, he does write a captivating (ahem) yarn of Ecuador and its people…and why its indigenous bowler has been pinned with the name of another country (the chapeaus were, in the day, exported worldwide via the Isthmus of Panama).

More recently, I have taken to treatises on the origins of food products. Among the goodies I have explored in the past year are Twinkies and doughnuts (neither of which I can eat due to a gluten intolerance). I must say that Twinkie Deconstructed by Steve Ettlinger was a bit dry (like a 20-year-old Twinkie), a little too scientific for my taste. Then again, considering that the Twinkie is more of a science project than a food product, maybe the tone is appropriate. Glazed America: A History of the Doughnut, by Paul R. Mullins, was also a bit professorial in tone, but more delectable to read. Sure, it's more about consumerism and soci0-economics than sugar and ice, but one chapter on doughnut history and another on the morality of downing dunkers are the frosting on the cake.

Lest you think I am a food addict, let me also mention another recent read--The Yugo: The Rise and Fall of the Worst Car in History by Jason Vuic. I can’t say it better than Sonja Sharp of Mother Jones. “Jason Vuic, a professor of modern European history, could have easily written a straightforward takedown of the most maligned automobile since the Ford Pinto. Instead, he uses the Yugo as a vehicle for an insightful and witty look at car culture, a half-century of Balkan history, and the last decade of the Cold War.” Indeed, Vuic’s paean makes luscious lemonade out of the world's most famous lemon.

Parenthetically, it does seem as though I am addicted to books with colons in their titles. As I wander through bookstores, monographs sporting colons are the ones I tend to digest. Both The Banana: The Fate of the Fruit That Changed the World and Bananas: How the United Fruit Company Shaped the World sound appeeling and are next on the reading list. There’s a lengthy book called The Toothpick: Technology and Culture that never fails to capture my attention in the bookstore. But I haven't sunk my molars into that one yet. Finally, The Book of SPAM: A Most Glorious and Definitive Compendium of the World's Favorite Canned Meat looks spamalicious (to coin a phrase). That's one, though, for which I'll have to work up an appetite.
Posted by Laura Powell at 7:17 AM No comments:

See the USA in USA Today/DC

USA Today has asked me to be the DC contributor to its upcoming "Best Drives in the USA" series. Restricted to the confines of the nation's capital, my selection of scenic drives was fairly limited. Here's what I have come up with. If you have other ideas, please let me know.

The best drive in the nation's capital is relatively short, only about five miles, and can be done by car or by bike. Either way, you'll need headlights, as this is a nighttime jaunt.

Seeing Washington's shining icons lit up against a dark sky is a reminder of the Founding Fathers' visions for this country. Wait until sundown and then wander over to the base of Memorial Bridge, just behind the Lincoln Memorial. Drive past Abe and then veer right and north. On your right, you'll get a glimpse of the Thomas Jefferson Memorial looming over the shimmering waters of the Tidal Basin. As you drive up Independence and jog over to Jefferson Drive, the Capitol will rise before you. Once you approach the Capitol, drive behind and around or right in front via 3rd Street. Next, circle back on Madison Drive, which takes you past the National Gallery of Art and the Smithsonian Museums of Natural History and American History. As you pass the museums, make sure to look ahead, as you'll get a full frontal view of the Washington Monument. Then swing over to Constitution to get a profile of the imposing obelisk and a glimpse (on your right) of the White House. Finish up by driving back to the Lincoln Memorial. Emancipate yourself of your vehicle and pay your respects to Abe. Then, sit on his steps and survey the entire Mall from his illustrious vantage point.

Image courtesy of Destination DC
Posted by Laura Powell at 9:00 AM No comments: