International Travel Bargains: Where the Dollar is Sky-High


Today, I discussed both topics on Great Day Washington on WUSA TV in DC. We focused on three key areas. Here's a link to the segment: http://www.wusa9.com/entertainment/television/programs/great-day-washington/travel-tuesday-4-places-to-travel-where-the-dollar-is-strong/143025718   *

The lagging euro means that countries in the Eurozone are cheaper than usual for Americans. The dollar is about 16% stronger against the euro than this time last year. Among the 19 countries in the Eurozone, Portugal is likely the biggest bargain.  It's traditionally been cheaper than its continental cousins and this year is no exception. United starts seasonal non-stop service from Washington Dulles to Lisbon this spring.


O Canada. Your loonie dollar is no longer on par with the US version, as it was three years ago. Today, it's only worth 80 cents vs. its U.S. counterpart. 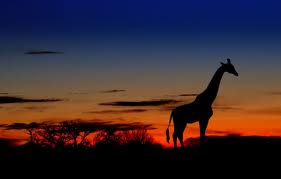 Then there's the South African rand, which has been plummeting for awhile. Three years ago, one buck bought 9.6 rand. Today, the almighty dollar buys 15.6 rand. Now, as many safaris are priced in U.S. dollars, you may not find huge discounts there. But when it comes to lodging, meals and activities like golfing or wine tasting or concerts, South Africa is going for a song. Add in the frequent deals offered by South African Airways, and you can have yourself a trip down under for less than ever before.

*Please don't hold me responsible for the video. That part of the production was not in my hands. Hence, the video of Paris while I'm talking about Portugal and cheesy tourism videos used for other footage.
Posted by Laura Powell at 1:15 PM No comments:

.....and no, I am not referring to the Travelocity troll.

a short, pithy expression of a general truth; aphorism.

If you are looking to become a travel blogger this year, I beseech you to follow the advice seen below.

#1: Avoid cliches like the plague. The Danish in Copenhagen isn't the best thing since sliced bread (since when is sliced bread so great, anyway, I wonder?) When was the last time you really felt like a kid in the candy store? And unless you are trying out a carousel, you don't give things a whirl.

#2: Avoid words you never use when talking. I'm talking iconic, quaint, and rustic.

#3: Just to prove that I am not overly persnickety, I'll allow one quaint or iconic per article. But never, ever use luxe or azure, for sure.

#5: Can a city boast? Apparently, it can, as "Chicago boasts the best deep-dish pizza in the world" and "Honolulu boasts grand luxe hotels, sandy beaches, and azure skies."  But IMHO, a place cannot boast.

#6: Is Albania the next Italy? I don't think so. But some travel writers do. "The next...." is not merely cliched writing; it is also somewhat pejorative if you think about it (i.e.--the next best thing to sliced bread....but it ain't no slice of bread).

#7: Don't trash the locals or local customs just for the heck of it. If you do, as in this piece I did for National Geographic Traveler  that literally trash talks Albania, provide context and balance.

#8: Maybe it's me, because I simply abhor chick-lit. Articles about your journey of self-discovery are usually a yawn, even to your closest friends. Sure, an Elizabeth Gilbert or a Frances Mayes may hit the jackpot with prosaic poppycock. But my best advice is to circumvent this form of literary litany.
An aside--why is it that 99 out of 100 of self-confessional, self-delusional pieces are written by women?

Which brings me to one more parenthetical point. You can pet a koala, but you can't pet a koala bear. Koalas are marsupials, not bears. Put that in your pouch and ponder. And one more point that may save your life one day: If you want to pet a koala, don't do so by awakening it from a eucalyptus-induced stupor. I can tell you from experience... this not a good idea. A koala awakened abruptly from its languor is a vicious animal. But that's a story to be chronicled another time.
Posted by Laura Powell at 7:31 AM No comments:

It's certainly understandable that it is often seen as being pure puffery. All too often, a most pedestrian place is praised as the greatest location on earth, a hidden gem with something for everyone.  Look, as an experienced travel pro, I do believe there's something to recommend about nearly every place. But let's not pretend every place is perfect (even when pictures make it look so).

Why does this happen? Perhaps because a writer got a free trip and thinks that the quid pro quo is to only write positive thoughts. Perhaps he thinks he will be blacklisted from press trips if he regularly reports on the negative (and in truth, this can happen). Whatever the reason, the negatives are usually left unreported, leaving the reader with a biased take.


Here's the rhetorical question, though: If a blogger is in bed with Marriott, will he or she write anything negative about the lodging behemoth?

Furthermore, will the blogger opt to ignore good news coming from competitors like Hilton or Westin?  Similarly, if one is being paid by the U.S. Virgin Islands, I doubt there will be much coverage about St. Lucia or Martinique.

But for those dear, dear readers who still take an interest in journalism, the good news is, there is still room for fair and balanced travel reporting....and God forbid...I don't mean on Fox News. In recent years, I traveled far and wide, sometimes on press trips, sometimes on discounted journeys, and sometimes at full freight. Regardless of who is paying the bill, I make sure my reporting is just that...reporting, and not puffery.  Here are two examples. The Albania story appeared in National Geographic Traveler (October, 2008). The Trans-Siberian piece ran in Travel Weekly (October, 2013), the industry's leading trade magazine. 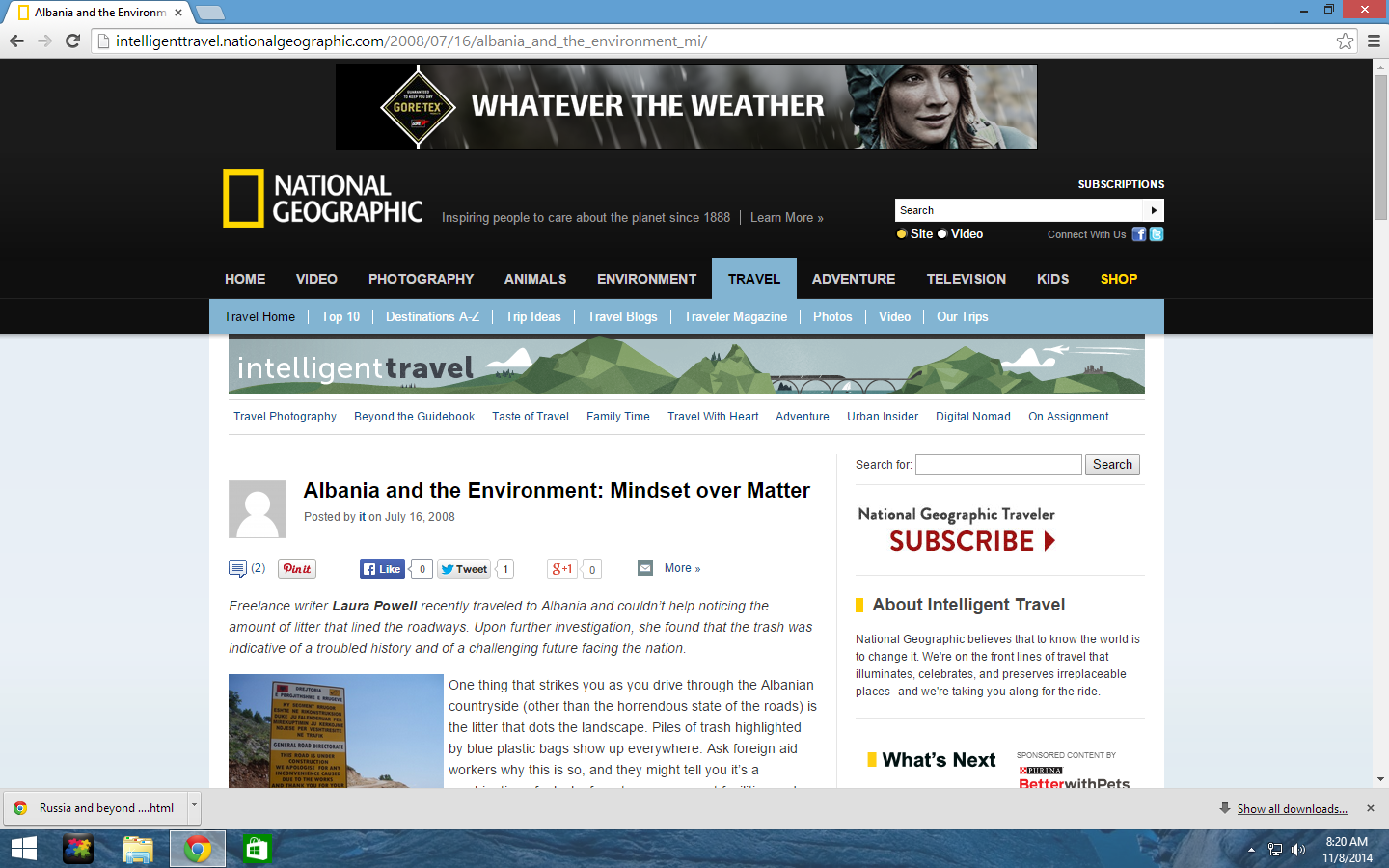 Please weigh in with your thoughts.
Posted by Laura Powell at 12:30 AM No comments:

For those of you who saw me on Let's Talk Live today, here's more information about the products discussed.  For this of you who didn't watch, here's the clip.


Trying to get in an in-flight snooze, but there’s ambient light seeping into your eye mask? Occles keep the light out. And, if you use them with sunbathing, they’ll keep the UV rays out as well. Light, durable, strong and bridgeless (to avoid a tan line across the schnoz), the eye cover is padded with soft rubber, and the fit is adjustable to match your head size. Available in a variety of vibrant colors, a pair of Occles retails for $31.

4 A Clean Getaway provides the germ-phobic traveler with a washable, reusable, and fashionable seat covers for just $36. Simply slip the elastic end over the top of the seat and unroll. Voila, a clean seat. What's more, a zippered pocket lines the inside of the bottom of the cover, so you can stow books, bottles and devices germ-free. 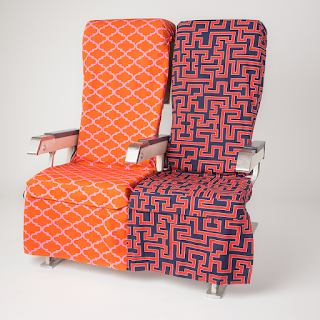 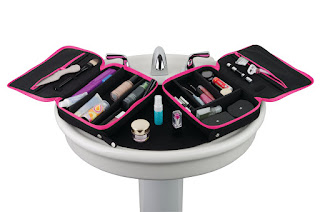 Ever find yourself in one of those tiny hotel bathrooms where the only place to stash your toiletries is...the lid of the toilet? Yuck. Everything ORGO to the rescue. The ORGO Lite is an expandable, portable case that creates its own counter space. Unzipped, it spans across most sinks to create space, while closed and zipped up, it fits right into a small suitcase. Interior compartments are designed to hold everything in place. The suggested retail price is $40.

Posted by Laura Powell at 8:27 AM No comments: