XOXO to the OBX: Adventures on The Outer Banks of North Carolina 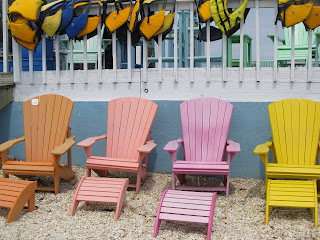 It's easy enough to kick up one's heels and just relax on The Outer Banks of North Carolina. But if one wants adventure, there's plenty for the taking. 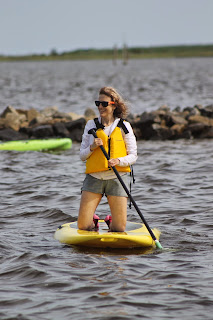 During my May stay, I recorded many firsts. First, I attempted the stand-up paddleboat. As you can see, I stood up. What you may not notice is that my SUP was actually stuck in the reeds when I managed to get upright. 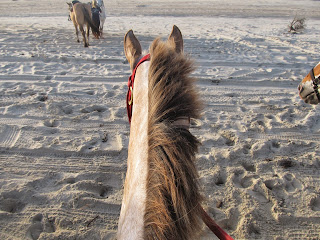 Next, I rode a horse. Now, I have ridden a horse before--more than a dozen times, not to be exact. But I had never ridden a horse on the beach. Nor had I ever fallen off a horse. Now I can say I have done both. Although one of our guides blamed my lack of horsemanship for the thud, the fact is, the saddle was not adjusted tightly enough. Thus, the saddle slid off the horse with me on it. But as the aphorism goes, when you fall off a horse, you get right back up. So I did, and I bravely continued the two-hour ride to the beach.


Forgive me, then, that after the tumble, I did not take to kite flying. But do note that The Outer Banks is a hot spot for the sport. In fact, Kitty Hawk Kites is the oldest kite-flying outfitter in the United States, dating back 41 years. 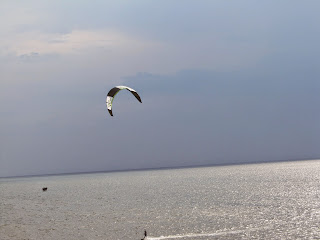 Next was a climb to the top of the Cape Hatteras Lighthouse. It's the tallest brick lighthouse in North America, at 208 feet. It takes 257 stairs to get to the top, and yessirree, Bob, I took the bait. 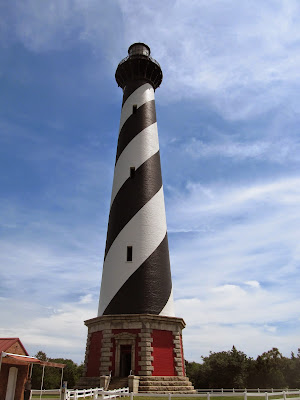 Speaking of that, I didn't go fishing. But if you're a fan of Marlin (personally, I prefer Tito), net, net--The Outer Banks is where it's at. 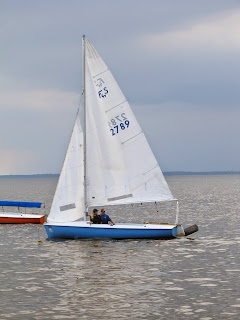 Next, we were scheduled for a sail. But with a storm racing in, safety came first and we stayed ashore. 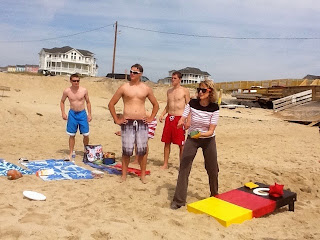 I attempted another first when I crashed a cornhole tourney. Yes, it took some grits (some cornpone humor there). I can't say I was amaize-ing at first try, but I see kernels of potential.


Finally, a bit battered and bruised from so much adventure, I headed to The Sanderling Resort in Duck for a much-deserved Warm Bamboo Massage. Horses and SUPs may try to break my bones, but bamboo sticks will never hurt me. 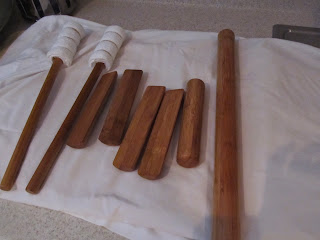 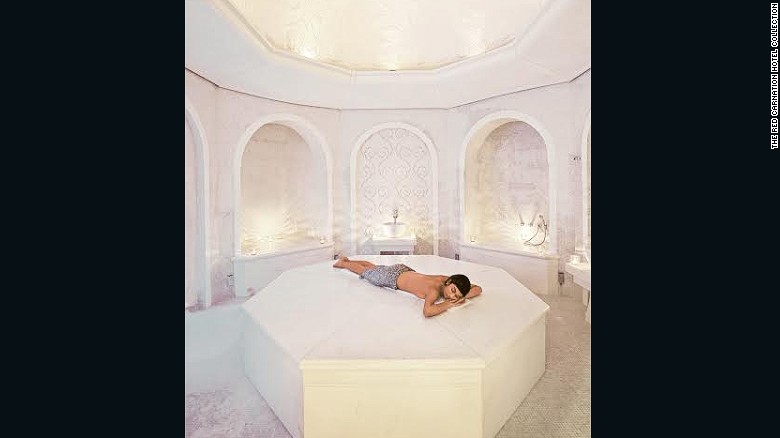 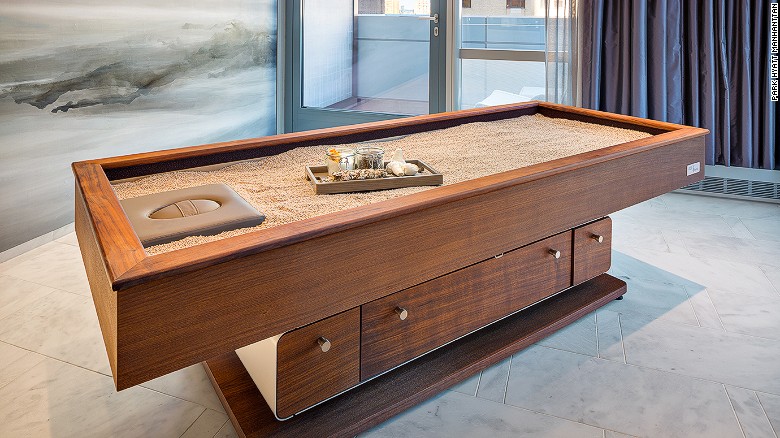 9 photos
Psammotherapy – The newest Middle Eastern trend to go West is psammotherapy, which is the therapeutic application of warm sand to alleviate aches and pains.
Hide Caption
6 of 9 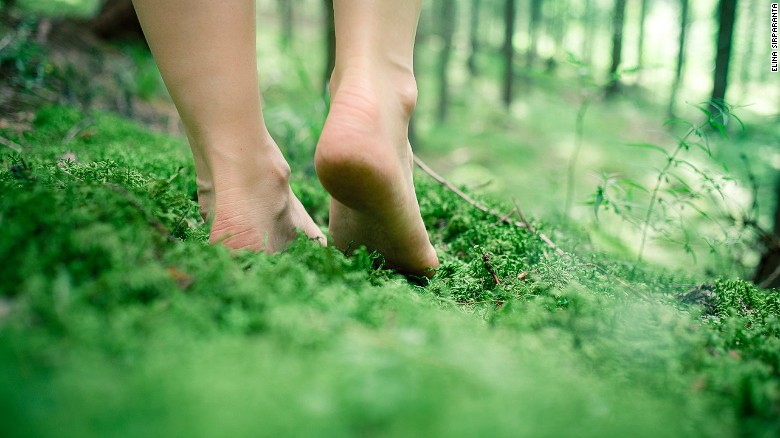 9 photos
Silence is wellness – Forest-covered Finland is tapping into the rising demand for quiet with an entire tourism campaign centered around the tagline "Silence, please."
Hide Caption
7 of 9 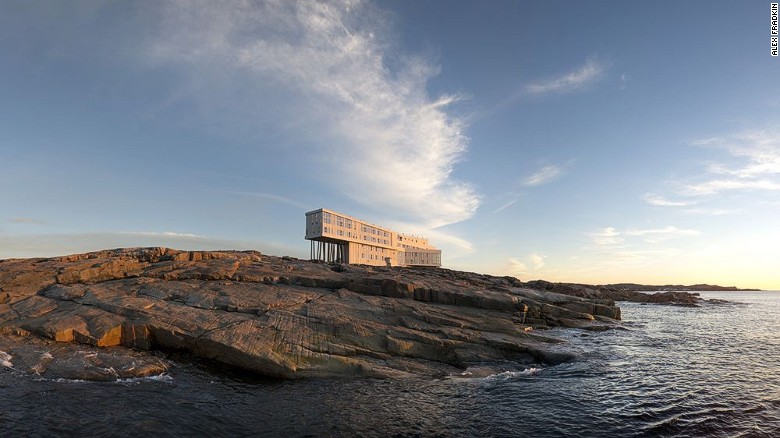 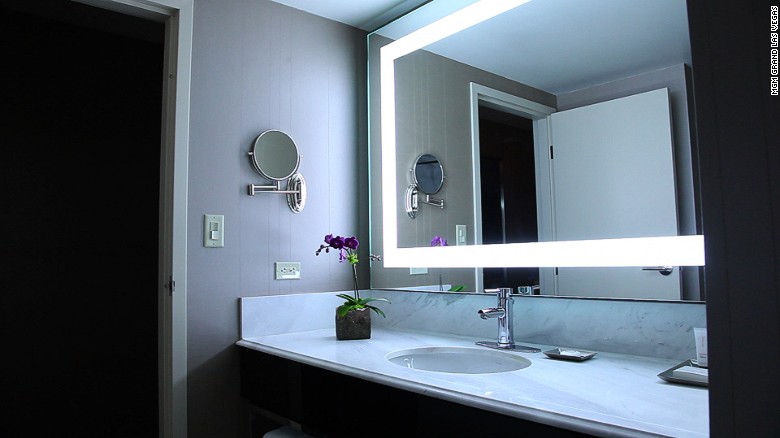 9 photos
Sleep therapy – At Canyon Ranch in Arizona, visitors are monitored with sensors to diagnose sleep patterns.
Hide Caption
1 of 9 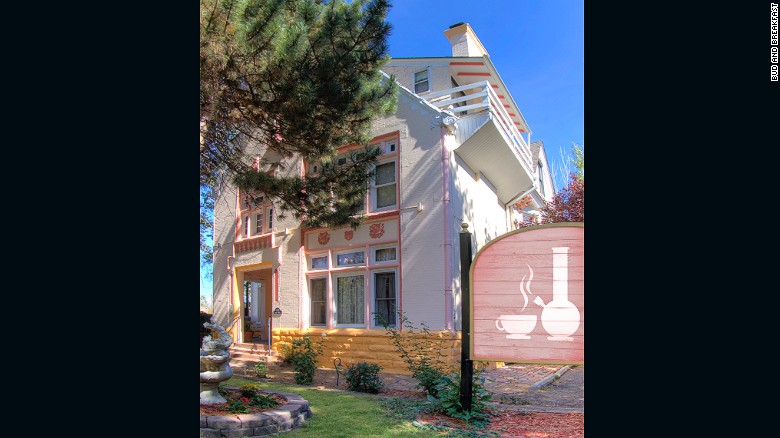 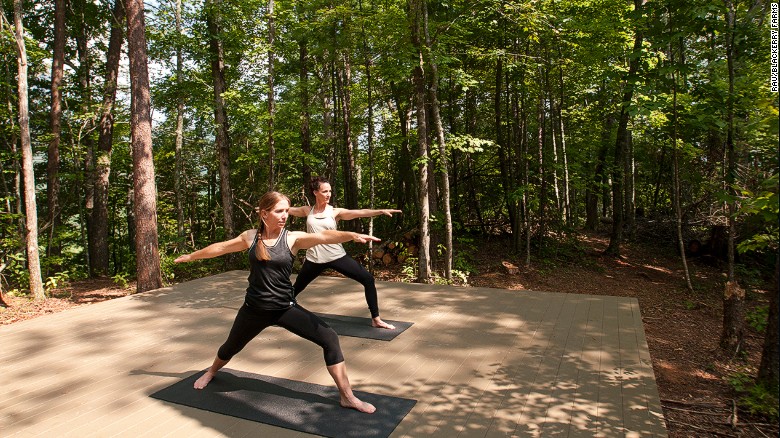 9 photos
Forest bathing – An import from Japan, forest bathing has nothing to do with water and you don't have to get naked to do it. People used to call this "taking a walk in the woods."
Hide Caption
3 of 9 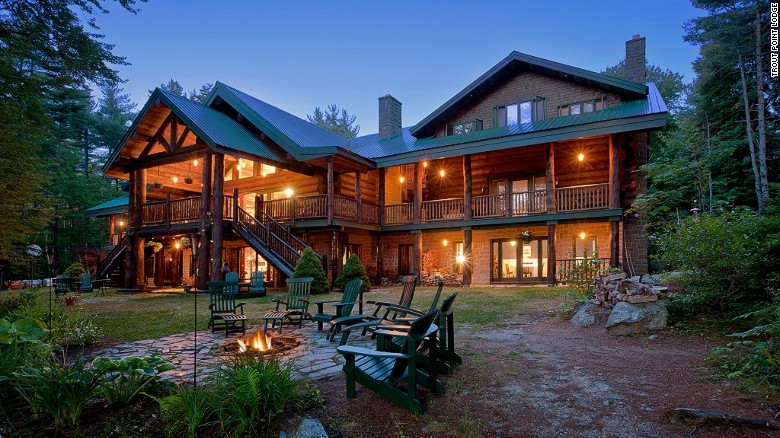 9 photos
Psammotherapy – The newest Middle Eastern trend to go West is psammotherapy, which is the therapeutic application of warm sand to alleviate aches and pains.
Hide Caption
6 of 9

9 photos
Silence is wellness – Forest-covered Finland is tapping into the rising demand for quiet with an entire tourism campaign centered around the tagline "Silence, please."
Hide Caption
7 of 9

9 photos
Sleep therapy – At Canyon Ranch in Arizona, visitors are monitored with sensors to diagnose sleep patterns.
Hide Caption
1 of 9

9 photos
Forest bathing – An import from Japan, forest bathing has nothing to do with water and you don't have to get naked to do it. People used to call this "taking a walk in the woods."
Hide Caption
3 of 9

(CNN)Walking in the woods, cannabis day spas and rolling around in sand.
These are just a few of the hottest trends in wellness according to SpaFinder Wellness 365, which claims to be the world's largest spa media and marketing company.
But which trends will turn out to be fads and which will stick?
Strange as they sound, it's worth remembering that some pretty odd wellness practices have come and gone through the ages.
Cleopatra indulged in milk baths and mud treatments -- variations of which can still be enjoyed today.
For some reason, though, bloodletting and leeches didn't manage to survive the test of time.
Distinguishing a useful practice from snake oil is a far easier exercise in today's wellness world.
"Science is now able to analyze wellness practices to prove which can be helpful and which are not," says Dr. Mark Liponis, corporate medical director for Arizona-based Canyon Ranch.
"As a result, there will be a greater adoption of therapies when science confirms their value."

Liponis points out that numerous studies are being conducted on the benefits of marijuana, such as its usefulness in stress management and symptom alleviation.
SpaFinder's 2015 Report on Global Spa and Wellness Trends notes that cannabis wellness is experiencing a high.
For decades, Amsterdam, with its "coffee shops," has been Cannabis tourism central.
A recent visitor survey noted that 16.5% of visitors admit that coffee shops/soft drugs is one of the main reasons for visiting, although marijuana use is a legal gray area in the Netherlands.
Given recent decriminalization laws in the United States, cannabis tourists may be trading out a Dutch treat for a Rocky Mountain high.
Colorado has been ahead of the pack in terms of legalizing recreational usage, to the point where "bud and breakfast" inns, luxury cannabis tours and the "the world's first cannabis day spa" have sprouted up.
Although state tourism officials deny the correlation, Colorado has been experiencing an increase in tourism since the law was enacted.
According to SpaFinder, a 2014 study discovered that out-of-state visitors account for 44% of marijuana sales in larger cities and up to 90% in mountain resorts.

Forest bathing, an import from Japan, has nothing to do with water and you don't have to get naked to do it.
Basically, it's a wander through the woods, with all senses keenly open to the sights, sounds and smells therein.
The Japanese government coined the term in 1982 ... a translation of "shinrin-yoku," meaning "taking in the forest atmosphere."
Since then, the government has funded forest-therapy studies, showing impacts ranging from lowering blood pressure to alleviating depression.
Research like this has made forest bathing a pillar of preventive medicine in highly urbanized Japan.
But now, walking in the woods for wellness is taking root around the world.
According to the SpaFinder study, South Korea is developing a multimillion dollar National Forest Therapy Center.
In Canada, the Trout Point Lodge (189 Trout Point Road, East Kemptville, Nova Scotia; +1 902 482 8360) is a center for forest bathing, as is Armathwaite Hall in England (Bassenthwaite Lake, Keswick, Cumbria; +44 17687 76551).
Um, didn't this used to be called hiking?

Middle Eastern and Islamic health traditions date back more than two millennia.
The hammam experience is the ritual the world knows best.
The deep-cleansing practice of scrubbing, soaping and pummeling is now gaining steam beyond its traditional borders.
For example, there's an authentic hammam circuit at the Hammam & Spa Oktogon in Bern (Weihergasse 3, Bern;. +41 31 311 31 01).
In South Africa, guests can experience a Turkish-style hammam at Oyster Box Spa in Umhlanga, Durban (2 Lighthouse Road, Umhlanga Rocks, Durban; +27 31 514 5000).
The latest Middle Eastern trend to go West is psammotherapy.
This is the therapeutic application of warm sand to alleviate aches and pains.
As far back as 1000 AD or so, the Persian philosopher Avicenna wrote about sand's anti-inflammatory properties.
Back in the day, people just dug a hole in the sand and enveloped themselves in it.
Nowadays, it's done with less messy sand tables.
In August 2014, Spa Nalai at the Park Hyatt Manhattan (153 West 57th St., New York; +1 646 774 1234) became the first place in New York City to offer psammotherapy sand table massages.

Silence may be golden, but its value is largely underrated these days.
"In the past, luxury was defined by cushy bathrobes and the thread count of sheets," says SpaFinder chief brand officer Mia Kyricos.
"But today's noise-saturated world, silence, solitude, space -- these are the true definitions of luxury."
Finland is tapping into the rising demand for quiet with an entire tourism campaign centered around the tagline "Silence, please."
Researchers at the University of Eastern Finland are even studying ways to make silence a tourism asset in the sparsely populated North Karelia region.
Finland is far from the only place where silence is a virtue.
Fogo Island Inn (Joe Batt's Arm, Newfoundland; +1 709-658-3444), which opened two years ago in Newfoundland, Canada, proudly promotes silence in its marketing material, boasting of "miles and miles of blissful nothingness."

Of course, silence is just one element in getting a good night of sleep.
Staying well means sleeping well.
But in today's 24/7 world, something's gotta give, and that something is usually sleep.
At Canyon Ranch (8600 E. Rockcliff Road, Tucson, Arizona; +1 520 749 9000) in Arizona, there's an actual lab where visitors can be monitored with sensors to diagnose sleep patterns.
Still, most places promoting "sleep therapy" are not hooking snoozers up to machines.
It's more about comfort, environment and special lighting.
For example, Stay Well Rooms at the MGM Grand in Las Vegas (799 S. Las Vegas Blvd., Las Vegas; +1 702-891-1111) are specifically designed to enhance rejuvenating sleep.
Features include blackout shades; energizing light therapy, which exposes guests to short periods of blue-shaded lighting to increase energy; and a dawn simulator, which gradually awakens the body through light and sound.
Clearly, there's a yawning gap in the sleep market in Vegas.
Due to demand, Stay Well at MGM Grand has quadrupled its room count from 42 to 171 in less than two years.
Journalist Laura Powell was one of CNN's original travel reporters. Her focus is on international travel news and trends. Read more of her work at www.dailysuitcase.com. Twitter: @dailysuitcase.

Posted by Laura Powell at 5:30 AM No comments: