Trailing of The Sheep: The Most Wild and Woolly Festival in the West


Ever since I caught wind of its existence, I had been fixated on attending the Trailing of the Sheep Festival. This wild and woolly annual event takes place every October in Sun Valley-adjacent Ketchum and Hailey, Idaho. It celebrates a 150+ year tradition of moving sheep from their summer pastures in the mountains to winter grazing areas. But it’s also a cultural event, filled with craft and cooking demonstrations, multi-cultural entertainment and sheep poetry. The latter roped me in—after all, who could resist a sheep bleating Keats and spinning yarns?


As my obsession grew, I knit together a fantasy about becoming Queen of the Sheep Parade, which takes place the last day of the festival. Nearly 2,000 sheep form a wall of wool as they saunter down Main Street Ketchum on their march toward their winter home. They are joined along the way by musicians and dancers of every stripe. My dream was to show off my good breeding by donning a tiara and walking amongst my little lambs as adoring flocks cheered from the sidelines.

And so, my little lamb chops, with this in mind, off I flew to the Gem State. How to become Queen of the Sheep…I ruminated over this ruminant dilemma and decided the best way to win the title was to start lobbying town elders and festival organizers. But upon arriving and grazing the landscape, I realized shepherding them might be tricky.There were many places around town and at the festival to look. I could hoof it to lamb cooking demonstrations or check out Sheep Tales  and Readings from the Land at the local library. I herd it through the ovine that the big kahunas might flock to the Championship Sheep Dog Trials held over several days or perhaps they might be buying knit hats, gloves and muttons, or learning grooming techniques at the Sheep Folk Life Fair. 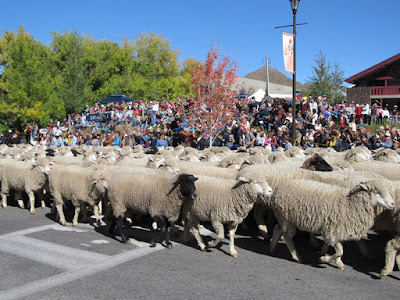 Finally, I settled on tracking them down at the Sheepherders Ball Saturday night. After all, a ball seemed fitting for a potential queen. I snagged a ticket. Shofar, so good. Then, as I hunted for a Prince Charming sporting mutton chops, I was told that, as the end of the parade route comes into sight, the sheep sometimes start stampeding to quicken the journey to their winter digs.

Suddenly, I envisioned myself in my own private Pamplona (this being the home of Hemingway, after all), overtaken by a mad mob of sheep goring me with their puffballs of wool. The dodge of ram would leave me with tiara askew and my garb transformed into the world’s largest livery of lint.

Alas, at midnight, my sheep dreams (and nightmares) were punctured after being told the shear truth—the Sunday Sheep Parade had no queen. Shorn of my dream, this piece of news got my goat. Baa humbug, said I. This year, I'm getting out of my rut and shuffling off to the Custer State Park Buffalo Round-Up in South Dakota instead. Watch out my little bubalus. There's nowhere to hide as I search for my crown.

Original version here.
Posted by Laura Powell at 5:30 AM No comments:

Email ThisBlogThis!Share to TwitterShare to FacebookShare to Pinterest
Labels: Idaho, Trailing of the Sheep

JFK, SUX. LAX, BRA. DFW, BOO. For those trying to read deep meaning into what seems to be a code,  CHL* out. These three-letter words are merely International Air Transport Association

Orbitz Blog recently made a delightful info-graphic based on the information below. Here's the link.


Back in the 1930s, when airports started springing up around the world, two-letter codes were assigned to the facilities. But as the jet age boomed, and more airports opened, additional combinations were needed, so an extra letter was attached. Therefore, many early airport codes, like LA, simply got an X added to their handles.


The origins of many airport codes are cousins of Captain Obvious. JFK stands for JFK Airport in New York. DFW is Dallas-Fort Worth. But others seem rather flighty. For example, Chicago’s O’Hare is certainly out of the ORDinary. Why ORD? O’Hare was built on a site that was once Orchard Field. Orlando’s MCO has similar historical roots, as it stands on the former McCoy Air Force field.


OK, let’s head to Canada. Back when the assignments started spawning, local broadcast letters were often incorporated into airport codes. In the U.S., television and radio stations east of the Mississippi were designated with the letter W (minus Pittsburgh’s KDKA). In the West, the opening letter was K. In Canada, it was Y. Y? We don’t know. But regardless, the country’s airports adopted the letter and the majority of its airport codes start with Y. YVR is Vancouver and YUL never believe it, but Montreal is YUL. Canadian rock band Rush named one of its most notable pieces, YYZ, after Toronto’s airport code.


Then there are those codes that are, well, titillating. Take BRA, from Barreiras in Brazil. While waxing Brazilian, let’s also mention Poços de Caldas, or POO. Manaus uses MAO, which would be more appropriate for Beijing, which, no peeking, is PEK (for Peking). The code for the airport in St. Petersburg, Russia is also a relic of the past. LED refers to Leningrad, the city’s moniker during the Soviet era.


Meantime, the code for St. Petersburg Clearwater International Airport in Florida is not as easy as PIE, any way you slice it. P--that’s for Pinellas, the county in which the airport is located. I is for International..and that E...no explanation. It does sound yummy, though.


Ranging from the mildly amusing to the politically incorrect to the social media savvy, there’s MAD in Madrid; FAT in Fresno; and DOH, that’s Doha. If this leaves you LOL, then you likely are in Lovelock City, Nevada.


Finally, there is the most famous of all the sobriquets. Sioux City, Iowa-SUX. SIX and SOX, apparently, would not do. For many years, the local population chafed at the code. Finally, however, the city and the airport took a big gulp, and now heartily encourage folks to Fly SUX.

*Challis Airport in Idaho
Posted by Laura Powell at 12:04 PM No comments:

Swing by #TravelTopics on today at 1 PM Eastern time/11 AM Mountain time to talk about everything from fall and family travel to unexpected places to find prime leaf-peeping and wine harvests. The chat is being sponsored by Visit Idaho, so if you are a Gem State native, be sure to give your homeland some love. Here are the questions. 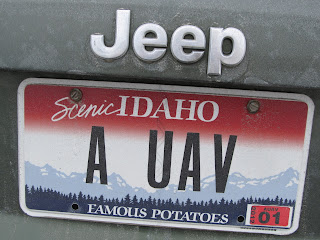 1. Where are some of the most unexpected places in the US to see fall colors? #TravelTopics 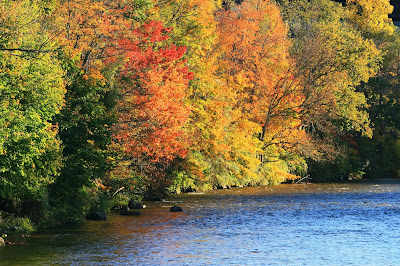 2. What makes a state a perfect place for family travel? #TravelTopics 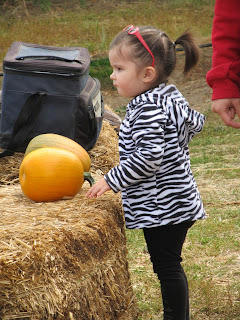 3.  What are some of the most unique activities you can do in your state? #TravelTopics


4.  What are some unexpected adventures for active thrill-seekers in Idaho? #TravelTopics

6.  Idaho’s culinary scene is flourishing. What are some notable Only in Idaho hot spots for one-of-a-kind bites? #TravelTopics

7. Winter's coming. Tell us about your secret spots for skiing and snowboarding. #TravelTopics

8: Families are traveling with grandparents, parents and kids. Suggestions for multi-generational trips in Idaho? #TravelTopics

Posted by Laura Powell at 10:59 AM No comments:

Fall Foliage in the Mid-Atlantic

Looking for fall foliage within an easy drive of Washington, DC? Catch my Labor Day segment on WUSA's Great Day Washington or check out the links below. 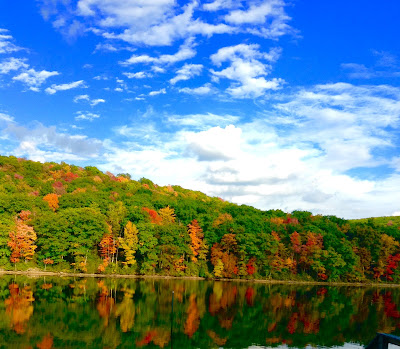 And don't forget about the beach. This is the perfect time to venture to Virginia Beach or Ocean City, Maryland. The temperatures of air and water are still warm, while room prices and crowds are cooling down. 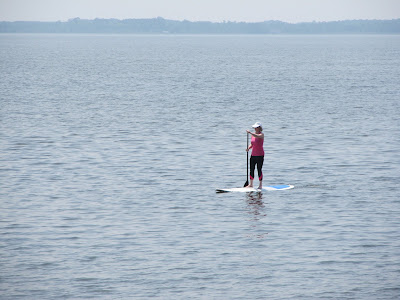 Posted by Laura Powell at 10:00 AM No comments: