According to the calendar, summer lasts through September 23rd. If you choose to wait until after Labor Day to experience a summer vacation, you're in luck. In general, September travel means lower rates, smaller crowds, and, if you are beach-bound, less traffic on the way.

For those who watched my segment on NewsChannel 8's Let's Talk Live...and even for those who didn't...here are a few more details for Washingtonians looking for the perfect late summer regional getaway.

Let’s start in Ocean City, Maryland. While the water and temperatures are still lovely after Labor Day, hotel prices tend to go down about 20 percent. September is prime golfing season there (with 15 courses in the area), so greens fees don‘t necessarily drop. But if you package golf with an overnight stay, you might be able to tee up a deal. Without traffic, it only takes about three hours to get to Ocean City.

While people often go to the beaches of eastern Maryland, they seldom head west. But Maryland’s western panhandle, located in the Alleghenies and just two-and-a-half hours from DC, is a feast for outdoor adventurers. Stay at the reasonably-priced Rocky Gap Lodge & Golf Resort, located in Rocky Gap State Park near Cumberland. Go golfing on the resort’s Jack Nicklaus signature course or take a bike ride along the C & O Canal or the Great Allegheny Passage. You can also wander across the Pennsylvania border to Ohiopyle State Park, where you can go whitewater rafting into October.

Meanwhile, near the southern end of the Allegheny Range is The Homestead. September is a fine time to visit one of the country’s grande dame resorts, which is a five-hour drive from DC. Rates drop about 15 percent from the summer months, and cooler temperatures make for more comfortable hiking, mountain biking, canoeing, or golfing. If that’s not enough activity for you, you can fly-fish (endorsed by Orvis), hitch a horse, play paintball, or attempt archery.

If you want something a bit closer to home, how about taking your Romeo on a trip to Casanova? Casanova, Virginia, that is, home of Poplar Springs Inn & Spa. Less than a hour from Washington, the small inn offers rustic charm, gourmet food (served up by noted chef Howard Foer), and a topnotch spa offering soothing treatments and ointments for all of your ailments. Nearby, there are places to ride horses, stomp on wine grapes, or hit the greens.
Posted by Laura Powell at 8:00 AM No comments:

Email ThisBlogThis!Share to TwitterShare to FacebookShare to Pinterest
Labels: Destinations, In the Media, On TV, Travel Deals 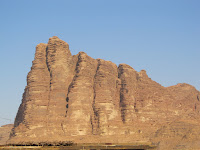 Want to hear about Petra, Lawrence of Arabia, and eco-tourism in Jordan? Then listen to my segment on Around the World Radio, which aired August 18th. The report, complete with pictures, is 36 minutes into the program. If you prefer to listen to the dulcet tones of my voice without distraction, the segment sans images can be heard by clicking here. Look for Track 4 from the August 18th show. If you are intrigued by the report, even more information is available at http://www.visitjordan.com/.

2012 will be a particularly interesting year to visit, as it marks the 200th anniversary of the "rediscovery" of Petra by Swiss explorer Johann Ludwig Burckhardt in 1812. 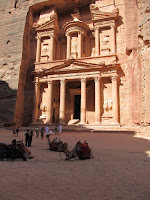 It's also the 50th anniversary of the premiere of Lawrence of Arabia, which was filmed in Wadi Rum. Special events marking the anniversaries are in the planning stages.

But there's more, including the Dead Sea and its spas; eco-tourism opportunities in the Dana Reserve; and biblical sites like the Jordan River and Mount Nebo, where Moses first saw The Holy Land. By the way, the site, located in a Muslim country and devoted to a commanding Jewish prophet, is now owned by Italian Franciscan monks. But don't worry--it's not a tourist trap. The ascetics maintain this aesthetic for-prophet place as a non-prophet (sic).

Email ThisBlogThis!Share to TwitterShare to FacebookShare to Pinterest
Labels: Destinations, In the Media, On the Radio

Laura of Arabia: Part I 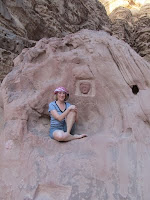 Out of the blue, a call from Amman. "Laura," the call said, "Could you come to Jordan to speak at a USAID conference on tourism development next week?" Weary from the heat wave that was swamping Washington, DC, I decided a trip to the desert was just what I needed to cool off.

In a series of upcoming posts, I will share my adventures, my discoveries, and insights garnered from my first trip to the Middle East. However, in this post, I will discuss my panic as I perused my summer wardrobe and perceived that everything I owned was either too short, too tight or too sleeveless for an Islamic country. Did I have any garb to wear? Would I be kicked out of the country for dressing inappropriately? It was a clothing cliffhanger.

Now, I am not a slut, mind you, nor do I play one on TV (as you can see from previous blog posts). But all my hemlines seemed unseamly, and my business dresses, thanks to Spanx, were quite form-fitting. And, just like Right Said Fred, with low-cut collars and keyholes, I was too sexy for my shirts. And so, with only three days to go before the trip (and with a 30-minute presentation to write about tourism development in a country I knew nothing about), I had to squeeze in a manic shopping spree.

I had been through this exercise before, prior to a trip to Morocco in 2001. And just like a decade before, I found shopping an exercise in frustration. You see, I am a Size 2. Not a lot of people in Washington are Size 2. So, choices were going to be limited.

I was simply petra-fied of finding nothing apropo for Jordan. And as I zipped from store to store, my fears were being confirmed. Lord & Taylor--oh God, nothing. T.J. Maxx--initially, it seemed promising. But a suitcase and a Calvin Klein knee-length (but sleeveless) frock were all-ah got. My patience was hanging by a thread until Filene's Basement, which became my own private Mecca. It yielded two Marc Jacobs cotton shrugs, perfect for covering the shoulders. I also found two pairs of knee-length shorts, an oversized pair of khakis, and a past-the-knee-length cotton khaki dress with short sleeves. It was fugly, but it was perfect for my needs and with it, I felt my Islamic ensembles were buttoned down.

But as I was packing my new suitcase the night before the journey, I discovered that the fugly khaki kimono still had its security tag attached. Ever wonder what happens when you try to pry off a security tag by hand? I'll tell you. 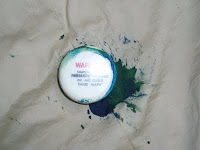 You get green ink all over your hands and your new fugly dress.

Well, long story short, when I got to Jordan, I found that my clothing concerns were overwrought, though not for naught. While dress there is certainly more conservative than in the U.S. of A., Western women can get away with showing a bit of skin. Sleeveless was fine at night and outside the city (except in mosques and churches). Knee exposure was fine, even during the day. The piggy toe cleavage revealed by my slingbacks was kosher; all other cleavage was left to the imagination. Though my ink blot of a dress was left home, I still passed the wardrobe Rorschach test.

The moral of this yarn is that you can never judge a cover by the book. Even though most tomes said cover up, the reality of Jordan was a mythbuster. And, as I was soon to discover, there were plenty of other myths and misconceptions about the country also waiting to be uncovered.

Stay tuned for Part II of Laura of Arabia.
Posted by Laura Powell at 7:21 AM 2 comments: