Some people collect spoons. Others collect charms. When I travel internationally, my souvenir item of choice is Monopoly. Now, I am very particular about my Monopoly collection. I only collect those games sold in-country about the country. In other words, no Star Wars Monopoly for me, nor the various versions highlighting universities or American cities (Chicagopoly). I am a purist.

I prefer to purchase Monopoly myself, as the search is almost as rewarding as the discovery. But the fact is, if you, dear reader, go directly to Azerbaijan or Zambia and want to buy me a game, please do. However, check first to see if those countries have a licensed version of the game. Otherwise, you may spend hours roaming aimlessly, as I did in Albania and Thailand. I wandered around Bangkok for an entire day looking for Mr. Moneybags, but no dice. I used my extra two days in Tirana, the capital of Albania, searching for Monopoly, only to discover the heirs of Mr. Hoxha didn't give the game a chance.

On the other hand, I have found Monopoly (or Monopoli, as it is called in some countries) in some amazing places. Back in 1989, pre-fall-of-the-Berlin-Wall, and during the height of the Solidarity movement in Poland, I found a cardboard and wood knock-off Monopoly in a small toy store on the backstreets of Warsaw. I bought two (zloty equivalent price per game-$1) and came back to the States to query Parker Brothers about the Polish game. PB responded by asking me to snitch on the independent Polish shopkeeper who was showing solidarity with capitalism (albeit by breaking the law selling an unlicensed version). I refused to get our venturing capitalist in a jam with PB and I shut down the conversation. Then, there was Dubrovnik, Yugoslavia, also in 1989 (when Yugoslavia was still Yugoslavia).  The game cost something like 200 dinar ($40), but the shopkeeper tried to charge me 2000 dinar ($400). Fortunately, I caught the error, thus saving dinar for dinner. 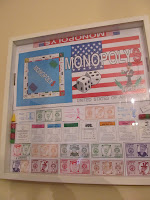 Maybe it wasn't quite as surprising to find the game in Romania in 1998, but one of the versions was a surprise (right). The Bucharest version was predictable, but the other board game was a Romanian depiction of the American game. The money featured caricatures of American presidents ranging from Reagan to Nixon to a guy I think is Hoover.

As the weeks go on, I will share pictures and trivia from some of my other two dozen plus games. Meantime, here's my list of games to date.

*Bold countries--purchased by friends; have not visited these countries
** (2) indicates two different versions of the game from the same country

Posted by Laura Powell at 6:00 PM No comments:


Happy Valentine's Day and Presidents Day Weekend! Here are some travel ideas that I shared on NewsChannel 8's Let's Talk Live this week.


For information on the travel destinations described, please see my February 11 post. The websites for the two gifts are www.shavetech.com and www.luggageamerica.com.

Posted by Laura Powell at 8:16 AM No comments: