Just because a property is located in a pristine environment, engages in sustainable practices, or buys carbon offsets to compensate for its environmental impact, that doesn’t automatically put it in this increasingly sought-after category. The definition of an eco-resort is a bit more nuanced than that. Europe is leading the charge in the space, not only by showing the world what exactly it can entail, but also in creating lots of properties that fit within its parameters.

One possible definition comes from Steph Curtis-Raleigh, whose Upgrade Publishing company produces International Glamping Business Magazine, along with glamping and eco-resort trade shows. “Eco-resorts are largely outdoorsy hotels where there is an environmental ethos,” she said. “It can be any type of accommodation — tents, individual structures, hotel  —but it’s down to the way it’s run; it’s a hotel with a conscience.” David Levanthal, founder of Regenerative Resorts, agreed that the definition starts with intention. “It goes down to the values of the people behind the resort,” said Levanthal. “How they got to where they are and their concern for the wellness of the entire environment.”

In this way, the eco-resort movement has much in common with the transformational travel trend, which Skift has been reporting on. The common threads are consciousness and concern about environmental and societal impacts.

Good old-fashioned marketing matters, too, according to Siniša Topalović, managing partner at Horwath HTL. “There are those resorts which are eco-friendly in terms of sustainability efforts and energy efficiency, but those initiatives are not always marketed to guests,” he said. In other words, if an environmentally conscious resort does not promote itself as such, it may not end up in the specific category of eco-resorts.

Often, eco-resorts are in the upscale and luxury tiers, he added. That’s because delivering seamless service in a calm environment often requires a place to be “individualized and small scale” — hence, toward the luxury end of the spectrum. “It’s not easy to do a three-star eco-resort,” said Topalović.

A NEW MONIKER FOR AN OLD CONCEPT

The idea of a resort located in nature and focused on sustainability started in northern Europe. It’s a particularly strong phenomenon in Scandinavia, according to Topalović, which many consider Europe’s most environmentally focused region. But that comes with a catch. Because Scandinavia is ahead of the curve, properties like Norway’s Juvet Landscape Hotel or PAN Treetop may not classify as eco-resorts, said Curtis-Raleigh. For the Scandinavians, “these properties are just something set in nature — it doesn’t have to be classified, not marketed in that way.”

In places like the Netherlands, France, and Greece, according to Curtis-Raleigh, many traditional tented camping and glamping sites are now upgrading themselves into eco-resorts, which “are more ambitious projects” often involving built structures, like cabins, treehouses, or containers. In the vast majority of cases, those projects “are accommodations providing eco- and nature-related experiences to guests, which allow guests to connect and immerse in nature,” said Levanthal. “The experience is in direct connection with nature and the environment around you.”

Both Slovenia and Croatia are leaning into the concept in a big way. These countries lost out on a lot of tourism during the war of the 1990s. When the fighting ended, “they had to get back into the game and quickly,” noted Curtis-Raleigh. “Because they had a chance to look at what was happening in the world at the time, they were able to embrace new ways of getting into the game with low environmental impact,” she said.

Growth of eco-resorts in these countries has also followed government policy, Topalović said. Slovenia’s national tourism office has gone all in for nature tourism, and the result has been an increase in specialized eco-resorts. In Croatia, the development of eco-resorts in rural areas is part of the solution to the overtourism problem along the country’s coast. For example, inland in Lovinac, the highly anticipated T-Nest eco-resort is set to open this fall. It incorporates 70 wooden villas in a scenic forest landscape. Green credentials include a natural pool with a self-cleaning system, an elevated tree canopy trail, and organic gardens and greenhouses supplying the on-site restaurants.

WHAT’S COMING DOWN THE PIPELINE

Your Nature, situated in 700 acres of preserved forestland in western Belgium, is scheduled to open later this year. The eco-resort is designed to preserve the area’s biodiversity and natural resources. It will consist of hundreds of small lodges built from sustainable materials. There will be multiple dining and nightlife concepts and a range of recreational facilities. What’s more, the carbon footprint for getting there will be small. Your Nature is a short train ride from London, Paris, and Brussels.

While the resort is owned by Edouard de Ligne, a member of the Belgian nobility, it’s going to be branded and managed by a notable hotel company: Dream Hotel Group, which recently signed on as the property’s management company. CEO Jay Stein said that even though Dream Hotels hadn’t originally planned to start an eco-resort, a chance encounter with a green-leaning real estate developer offered reason enough to give it a shot. Since the world is heading this way, and the concept fit into de Ligne’s desire to be “progressive and sustainable,” the partnership made sense.

Your Nature, which will be branded under Dream’s Unscripted label, will be a pilot project, according to Stein. “We are trying to get fully immersed in the concept and are learning as we go,” said Stein. “We aren’t bringing a playbook and dropping it in there. That said, we are hoping to bring in elements from existing brands, and vice versa.”

Will other hotel companies follow Dream Hotels in the eco-resort movement? According to Topalović, “While eco-resorts are becoming increasingly popular, they are not mainstream. They are still perceived by investors as niche/boutique,” which, he said, may not be of interest to bigger companies — yet.

But Curtis-Raleigh sees eco-resorts as products that will appeal both to investors specializing in social responsibility and to large hotel companies. That’s because the desire “to seek out experiential travel and discover modern, unique accommodations doesn’t seem to be going away.” Just look at AutoCamp, UnderCanvas, and Getaway, all of which have raised millions of dollars in recent years from venture capital funds, private equity firms, and major hospitality companies.

As big money comes into the picture, however, there is a danger that the concept could end up getting misappropriated. There is certainly potential for greenwashing, which is when an organization falsely presents itself as environmentally responsible. According to Curtis-Raleigh, the industry “would like to come up with some standards as to what an eco-resort is to avoid greenwashing.” That said, “We don’t want to impose these standards, but we do want to ensure that eco-resorts always serve to improve the lives of the people who live around them and the environment.”

This article also appeared in Skift in February.

Posted by Laura Powell at 10:49 AM No comments:

Where Americans Can't Go This Summer

Americans are pariahs, even in their own country. While the much-whined-about EU travel ban on Americans has been in the headlines recently, lesser known is the fact that U.S. residents from states 1 through 48 (based on entry to the Union) are also personae non gratae in states 49 and 50. 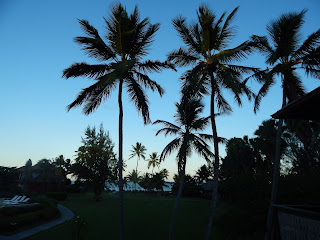 For several months, Hawaii has been requiring Americans from the mainland to quarantine for 14 days upon arrival. That is set to change on August 1, when all travelers arriving in Hawaii will be required to get a valid COVID-19 test within 72 hours of their trip, and to show proof of a negative test result at the airport, to avoid the 14-day quarantine. The FDA-approved PCR test from a certified laboratory will need to be done prior to arrival. No testing will be provided at the airport.

Alaska currently has similar rules in place. Americans arriving from the Lower 48 have to quarantine 14 days upon arrival in the state unless, according to the State of Alaska website, "They have proof of a negative molecular-based COVID-19 test result obtained 72 hours before arriving in Alaska. Travelers with a negative test within five days of arriving in Alaska will be retested at the airport and should minimize interactions with others until the results of the second test are available."


Of course, several states on the mainland are enforcing their own 14-day quarantine rules against travelers from states with high rates of COVID-19 infection. However, those quarantines are more challenging to enforce than those of Hawaii and Alaska, because people can cross continental state lines undetected when traveling by car, bike or foot.


So, where can Americans go this summer if they want to get out of Dodge? Most Caribbean islands are welcoming U.S. citizens, just in time for hurricane season. Many islands, however, do require negative COVID tests or testing upon arrival.


Some fly-to destinations in Mexico, like Cancun and Los Cabos, are welcoming Americans, but not all tourism facilities in those areas are open. Americans can also fly to Dubai. For those who want a Europe fix, Serbia is currently welcoming Americans without restrictions. England and Ireland say Americans can come, but they have to quarantine for 14 days. Other European Union countries, plus non-members Switzerland, Norway and Iceland, are putting American inbound travel on ice for the foreseeable future.