When it comes to New Year’s Eve celebrations, very few places are dropping the ball these days. Instead, they are dropping wenches, wrenches, pickles, potatoes and bologna—and that’s no bologna.


Pennsylvania may reign supreme when it comes to dropping things on New Year’s Eve. There are more than a dozen drops around the Keystone State, ranging from a button in Carlisle to a sled in Duncannon to the aforementioned wrench in Mechanicsburg (naturally).But certainly, Lebanon’s Bologna Drop takes the cake as a must-see New Year’s Eve event. You never sau-sage a thing as a 250-pound lunch meat plunging 16 feet to the excitement of adoring peeps.

Speaking of PEEPS, the marshmallow concoction is usually associated with Easter. But in Bethlehem, PA, where the treats are made, the drop of a 4.5-foot tall, 85-pound illuminated PEEP chick makes New Year’s Eve egg-stra special.

What’s the dill with pickle drops? While it’s a “no-briner” that Dillsburg, PA drops a six-foot Mr. Pickle, why is a place called Mt. Olive celebrating with a cucumber? It turns out the North Carolina burg is home to the largest independent pickle company in the country. But an unanswered pickle is why Mt. Olive opts to drop its three-foot cuke down a flagpole at midnight Greenwich Mean Time (7pm EST).

Dairy gets its due on New Year’s Eve in Wisconsin. In Plymouth, the former home of the National Cheese Exchange, a giant cheese wedge gets lowered from a 100-foot crane. But come early. The cheese roars at 10pm. Sounds gouda to us.
Famous Potatoes, indeed. On New Year’s Eve, Boise, Idaho’s most notable spud is a luminous 16-foot tuber known as the Glowtato. Here’s the dirt: Thousands of spectators take to the streets to watch the s’mashing potato plummet in front of the State Capitol at midnight.
In Key West, Sushi gets dropped on December 31…but she’s actually a drag queen and not a piece of raw fish. Sushi sits in a giant red stiletto that goes down at midnight. But plenty of actual sea creatures are celebrated along the Eastern seaboard on New Year’s Eve. Key West also drops a conch (and a wench, but that’s off-topic). Easton, Maryland lowers a crab. And in Eastport, Maine, the country’s easternmost city, they drop a sardine. An hour before the sardine goes down, a maple leaf falls in Eastport, sweetly celebrating the city’s neighbor just across the border. Why 11pm EST? Because it’s midnight in Canada. O.
This story originally appeared here.
Posted by Laura Powell at 12:37 PM No comments:

Holiday Gifts for Your Favorite Traveler

Looking for a holiday gift for your favorite traveler? This post offers all sorts of suggestions and includes a recent Gadget Guru segment from Great Day Washington as well. 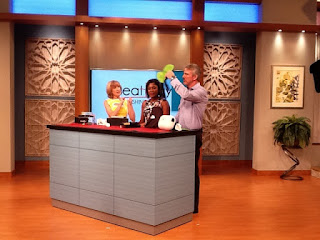 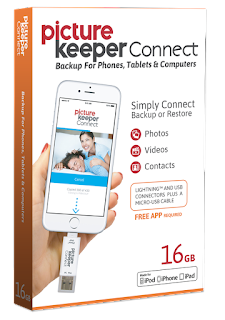 It's happened again. You've taken so many darn pictures that you've run out of space on your phone. Back up those images so you can take new ones this holiday season. After purchasing the Picture Keeper Connect ($119.99 for 16 GB), download the app to facilitate the super-easy transfer of photos and videos from a smartphone or tablet to a computer or a portable compact USB drive. 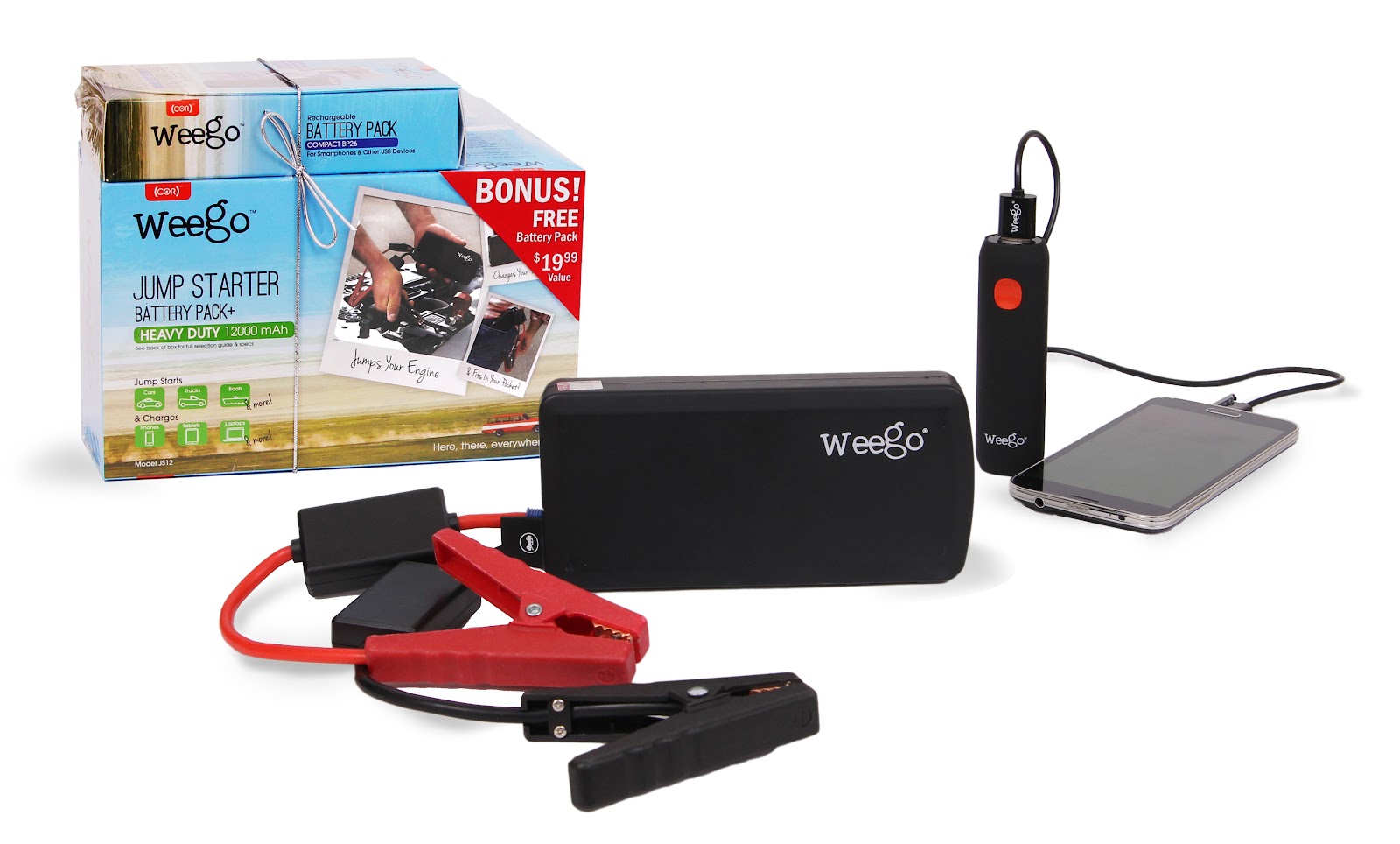 How about a battery pack that not only charges your mobile devices, but your car as well? Weego is a pocket-size jump starter battery pack that can do it all. You can give juice to the main power pack at home or in your car (cables included), and then throw Weego in your glove compartment for those times when something in your car is in need of a charge. There's even a built-in flashlight. There are three Weego models, ranging in price from $99.99 to $289 (depending on type of engine you need to charge). Easy-to-follow-instruction are included, as are jumper cables.
HumanCharger 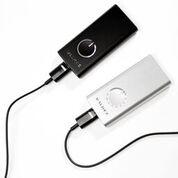 Sometimes, it's the traveler who needs the charge. Could it be that the quickest way to alleviate jet lag is... through the ear? That's the claim of HumanCharger's Finnish inventors, who say their device cuts typical jet lag recovery time in half by emitting light into the ear. The operating principle of the HumanCharger: The headset beams UV-free, blue-enriched white light through ear canal for 12 minutes at a time to the light sensitive regions of the brain that keep circadian rhythms in sync. The HumanCharger ($269.99) comes with a smartphone app that tells you when to take the needed 12-minute bursts of light (after you enter details of your trip). I haven’t tried it myself, but the HumanCharger has been certified to meet the EU Medical Device Directive.
Clean Wave Sanitizing Wand

Germs are everywhere when you travel. Airplanes and hotel rooms can be cesspools of microscopic bugs and bacteria. But the Verilux Clean Wave Sanitizing Wand ($69.99) can zap your these worries away. The wand uses powerful ultraviolet-C light to significantly reduce microscopic germs, mold and dust mites. Take the 10" battery-operated wand and wave it over doorknobs, light switches, bathroom fixtures and the remote control in your hotel room. On the airplane, you might want to zap the tray table and the seat back pocket, two of the dirtiest places around. Frankly, I might be tempted to zap my seatmate as well, particularly if he's hogging the armrest. But the instructions do not sanction that usage.

When a traveler is sightseeing, (almost) nothing is more important than footwear. Yet, for women, it can be difficult to find comfortable and good-looking shoes, particularly for winter weather. Well, these Arcopedico boots were made for walking. The knit upper, the soft textile lining, a twin arch support system and a cushioned insole provide all-day comfort. Just as important, the soles are non-slip. 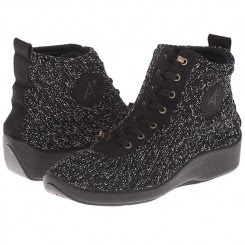 While you are enjoying these images of sites along the Via Emilia, take a listen to my recent segment on Italy's Emilia Romagna region on Around the World Radio.  Go to the December 1 show and forward 12 minutes in. 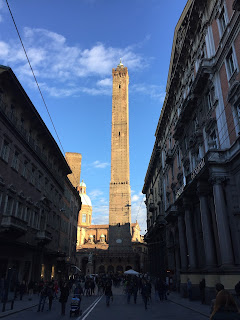 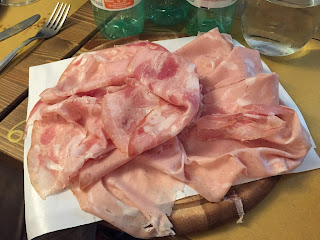 Teatro Regio di Parma (and yes, that's the Michelin Man off to the side) 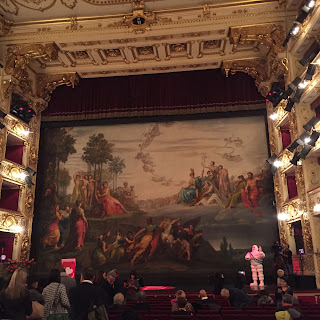 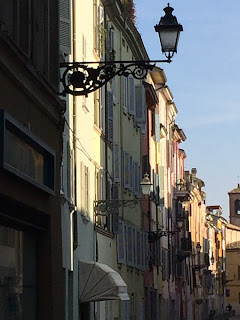 A Wheel of Parmigiano Reggiano
Getting Inspected 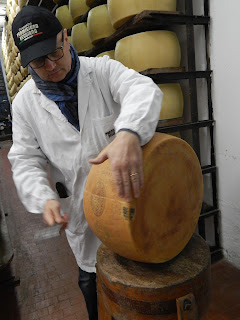 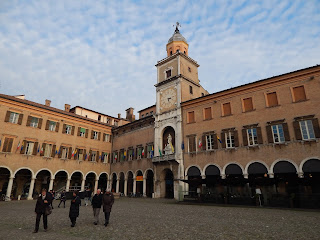 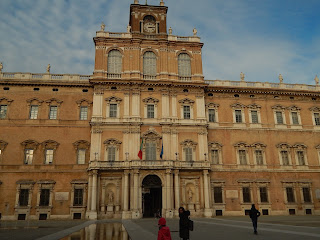 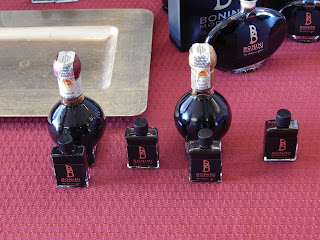 Just a Spoonful of Balsamic
(the perfect digestive) 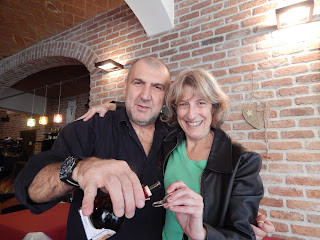