Stocking Stuffers to Knock Your Socks Off...and Suitcases to Boot

If you still haven’t bought that perfect gift for your favorite traveler (or me--address provided upon request!), here are a few last-minute ideas. If you watched my segment on WUSA-TV in Washington today, here is the promised where-to-purchase information. If you are shopping online, however, you will have to make due with a product picture for Christmas Day itself. Or procrastinators can put a positive spin on the delivery delay and say they are extending the holiday.

On the Saturday before Christmas, you don’t want to find yourself at Best Buy, Target or Wal-Mart…you really don’t. Instead, hit a luggage store. No lines here, which, you must admit, is an anomaly when suitcases are in the picture. So many of us travel with boring black or blue bags, which can be easily mixed up at the baggage carousel. So, why not buy a present that pops? Heys Britto Collection is based on the designs of pop artist Romero Britto. Thanks to its polycarbonate material, the carry-on size weighs a mere 6.7 pounds. Yet, it’s as hard as nails in terms of protection. 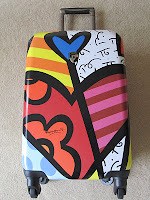 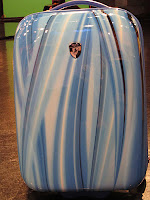 If you prefer something a little lighter, a little cheaper and a little less flashy, Heys 20-inch xCases cost $150. They weigh in at just 5.1 pounds. www.heysusa.com 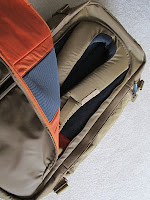 If you prefer something super-duper lightweight, you can go with canvas. The Briggs & Riley BRX collection provides a lightweight solution with extreme performance capabilities. The Exchange Duffle is like two bags in one…it goes from duffle to backpack in one easy zip. Since the duffle compresses, it’s perfect for squeezing into small spaces, like overhead bins. It costs about $160 and is available at fine luggage shops. For a store locator-www.briggs-riley.com/

If you are looking for last-minute stocking stuffers for the traveler, iPad and tablet accessories will knock their socks off. Aside from being available on-line, you can find them at electronics and computer stores. Love, love, LOVE the Menotek Waterproof Bluetooth Flexible Keyboard. Anyone who has been frustrated trying to write an article (ahem) on their iPad or a text on their iPhone will find this type of gift striking. It’s waterproof, it’s washable, and it’s wonderful. The retail is $79.00, but I found it on Amazon for $29.99. 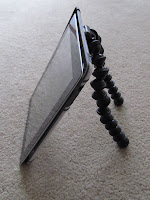 If your travel/computer geeks are also yoga freaks, they will be head over heels…or heels over head…for this adjustable Gorilla Mobile Yogi for iPad by Joby. The Yogi stabilizes the iPad on any surface and offers adjustable viewing angles, including Downward Dog (left), Half Lotus (below) and Spinal Twist. You can also hang it from a bar, in case your exercise of choice is pole dancing. It retails for $39.95, although I found it cheaper on Amazon. 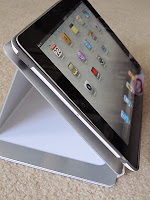 Joby also makes the Gorilla Mobile Ori for iPad for your favorite Zen master. Inspired by the art of origami, it’s a iPad case that bends and folds in multiple ways. Best yet--it has a swiveling hinge. It costs $59.95 at http://www.joby.com/

Speaking of iPad cases, this year's style is both fashionable and functional. In this case, if you want your iPad to look super skinny, just like a catwalk strutter, there’s the STM iPad Skinny case. Like its supermodel cousin, the case is sleek with a hard shell. It has an auto on and off front cover that wakes up the device, and control buttons are easy to access. 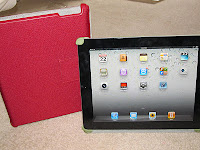 The foldable front cover can be styled for typing or viewing angles. It retails for $50, but you can find the case on Amazon for $30 or so. http://www.stmbags.com/
Posted by Laura Powell at 8:05 AM No comments:

Email ThisBlogThis!Share to TwitterShare to FacebookShare to Pinterest
Labels: Holiday Travel Tips, Humor, In the Media, On TV, Travel Gifts

Where To Go This Winter*

Thanks to climate change, it's likely that this winter is once again going to be long and brutal. Even the hardiest cold-weather enthusiast is likely, at some point, to be driven to get the heck out of Dodge. And if Punxsutawney Phil decides the cold will extend six weeks beyond Groundhog Day, a winter getaway will go from a maybe to a must.

From January through March, people usually seek out the sun. Naturally, thoughts turn first to islands or cruising. But don’t forget, if you go south of the border….south to the Southern Hemisphere that is….it’s summertime. South America is often overlooked as a winter destination, but with archaeological treasures like Machu Picchu and Easter Island, along with natural wonders like Iguazú Falls and the Galapagos Islands, it’s a continent that should definitely be placed on the map of winter possibilities.

While flights to South American countries can be lengthy, jet lag is rarely an issue, as the continent shares most time zones with the United States.

If you don’t want to go beyond the equatorial beltway, however, a tropical escape to the Caribbean or Hawaii can be the perfect elixir to whatever SAD symptoms you may be feeling. Aside from escaping the cold, another advantage of traveling to islands in January and February is a lack of crowds and shoulder season rates. Even five-star resorts are known to discount during these months, which fall between the busy holiday travel season and spring break.

The same season delivers value on the high seas. The big news in cruising these days is the proliferation of home ports outside of Florida. That is particularly helpful in the winter, as cruisers can avoid the potential of airport delays by driving directly to their ship of dreams. On the East Coast, winter port options now extend from Florida to Charleston, South Carolina to as far north as New York City (with Baltimore in between). Most of the ships sailing from these ports during the winter are Bahamas-bound. If you want to sail farther into the Caribbean, the Florida ports are still the best option, although there are also winter trips scheduled out of Galveston, Texas.

Winter golf getaways are par for the course in some of the country’s southernmost states. If you want to shoot for a multi-sport winter getaway, remember that it’s easy to hit the greens and then sample the succulent fruits of baseball during Grapefruit League season in Florida and Cactus League season in Arizona. 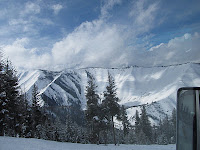 Of course, for some folks, a winter sports vacation can only mean one thing--skiing. The good news about ski resorts in places like Colorado, Utah and Idaho is that while the weather is cold, it’s also generally sunny and dry. So the cold doesn’t feel as intense. If you want to go to a legendary ski resort without the crowds, Sun Valley, Idaho may be America’s best-kept secret. Although it lays claim to being the country’s very first ski resort (thank you, Averill Harriman, circa 1936) and a former mecca for Hollywood movie stars (circa the 1940s and 1950s), most folks nowadays find it challenging to locate on a map. While the Hollywood scene is far more low-key these days, star power still exists in the form of present and former winter Olympians who call the town home. And if these moguls of the mountains consider Sun Valley a gold medal winter sports destination, the peak is worth the trip.

*A version of this article appears in The Weekly Standard's December 19 issue.
Posted by Laura Powell at 6:00 PM No comments:


It’s that time of year when Santa, Hanukah Harry, and Kwanzaa Kwame are checking out who has been naughty and who has been nice. For all of the nice travelers on your holiday gift list, here are a few items I suggested playing the travel expert on NewsChannel 8’s Let’s Talk Live on Tuesday.
Posted by Laura Powell at 7:00 AM No comments: