One Night in Novosibirsk

One of the things I love about traveling behind the former Iron Curtain is that so many quirks still exist from those rather surreal days. Last night's stop in Novosibirsk, the capital of Siberia, provided that sense of deja vu as yet unexperienced in Russia.

As noted in a previous post, the visit itself was delayed for five hours. What was supposed to be a day-time city jaunt turned into a twilight and post-twilight tour. At 9 PM, we arrive at the very impressive train station, shaped like a train by Constructivist architects who apparently took their marching orders quite literally. Build a train station, they were told, and they built a station resembling a train. We stepped out in the damp cold to watch a cultural performance while standing in puddles. Although I have never stood in a puddle to watch such a performance, it nonetheless reminded me of the ones that were de rigueur on tours designed by Intourist, Cedok, Orbis and other state-run tourist agencies. 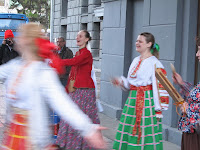 Actually, the performance was quite pleasant, as those things go. But the odd thing was when the performance ended, one of the girls picked up a pail and solicited donations. Now, THAT would have never happened in the Soviet Union. My companions and I thought it rather beyond the pale for a luxury trip. I have never observed performers, hired by a tour company to sing for their supper, passing the hat.

Moving along,
our bus couldn't get out of the parking lot for several minutes, as the gate was closed. So, by the time the city tour by bus started, it was 9:50 PM. First stop--a statue of Alexander III next to a span of Trans-Siberian Railway bridge. With light rapidly diminishing, we then drove through what dimly appeared to be a nondescript city. By the time we got to the main attraction, the largest theater in all of Russia, it was nearly pitch black. Apparently, there was a statue of Lenin in the courtyard, along with other sculptures
we couldn't see, except in dark silhouette. But our guide acted as we had night vision, pointing out details impossible to spot.

Then there was the propanganda pitch singing the praises of Novosibirsk as the country's third largest city, its third largest cultural center, and its third largest educational center. Apparently, it is also a Russian mecca for scientific research and the ballet school there is state-supported. We were encouraged by the guide to stay for a month, so that we could go to the ballet and opera and see 25 different performances for as little as 30,000 rubles (or $100) total. I do not recommend this idea.

My overall impression of Novosibirsk-- all in all, there really is nothing to see here, which is a good thing, because we couldn't see it.