After leaving the oh-so-chic Faberge, my next mission is finding the Museum of Hygiene, a Soviet-era relic that would appeal to my taste for the quirky. I head to Italyanskaya Street, which is right around the corner from the Faberge Museum. I stumble upon the sign below  and assume I have accomplished my mission. 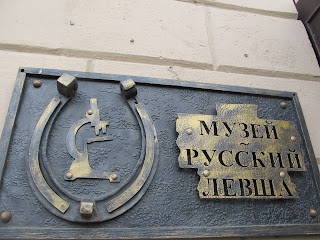 It's a natural mistake to make. One sees a microscope, and understands the Cyrillic to read "Museum Russia Levsha".  I don't know what Levsha means, so I'm thinking maybe he's a famous Soviet doctor.  Thus, I go in, pay my admission (300 rubles--same as
the entry fee to the Hermitage), and come upon a caboodle of microscopic masterpieces.

I'm talking teeny-tiny works of art--all less than 1 millimeter in size, and all viewable only through a microscope. Clearly, this is not the Museum of Hygiene. No, I have discovered the Russian Levsha, founded by the International Craft Guild of Masters.

Aside from Winnie the Pooh and friends hanging on a walnut shell, you see things like the world's smallest matryoshka doll balanced on the top of a strand of hair and camels carved into the eye of a needle.

In case you are wondering, it turns out that "Levsha" ( Левше) is a Russian folk hero, a left-handed artisan who is able to craft shoes for a flea.

After peering through dozens of microscopes, it's time to continue my quest for the Museum of Hygiene. And there it is, located just down the block. Housed in yet another St. Petersburg palace (circa 1755), the interior definitely hearkens back to Soviet days.

The museum was founded in 1919, shortly after the Russian Revolution. It was part of the plan by the new Soviet of the People's Commissars to drive home the importance of health and hygiene. 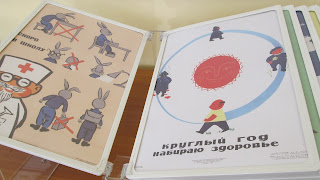 Aside from numerous posters depicting warnings against all sorts of evil, there's Pavlov's Dog. I kid you not. An encased Pavlov's Dog, which should ring a bell to my intelligent audience, is the centerpiece of an exhibit covering conditioned reflexes. I must admit, looking at the caged beast inspired a gag reflex in me.* 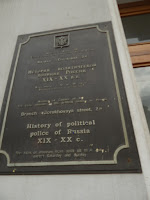 Speaking of KG-beasts, another offbeat St. Petersburg museum is Gorokhovaya 2: The History of the Political Police and State Security. The  locals call it the KGB Museum. Sadly, I stumble upon it during the weekend, when it is closed (it's open from 10-6 weekdays). So, I cannot provide a first-hand report. I can say that it is located in an Art Nouveau building that housed the  bodies of political control from pre-Revolution days through the Soviet era. According to the website, inside are expositions covering the "activities of secret services that ensured the political security in the Russian Empire and the USSR, the suppression of dissent, and the role of secret services in political society."