Kudos to Widness and Wiggins PR for coming up with this sweetheart of a press release.
I've added a few editorial comments of my own in  pink.

“All the world loves a lover,” mused American thinker, Ralph Waldo Emerson.  That being said, with Valentine’s Day around the corner, here’s a week’s worth of romantic courtship rituals of the wild kingdom. 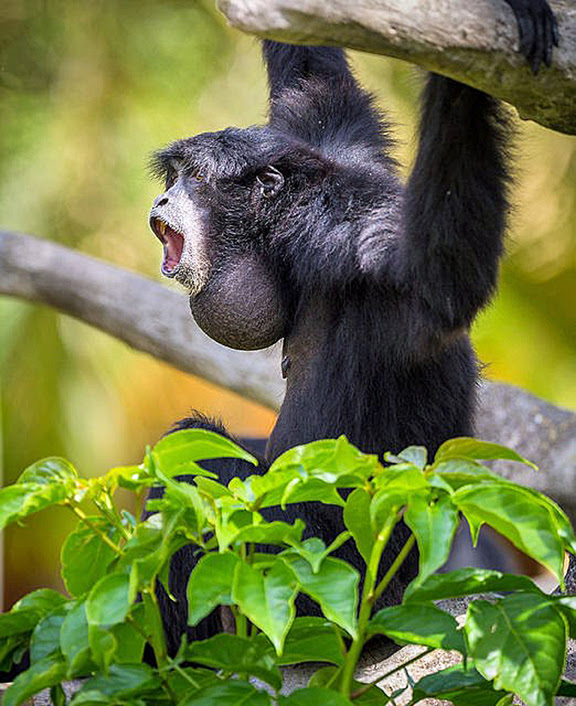 1) Gibbons: Nature’s Great Crooners: For these tree-top swingers, marital harmony begins with sonic harmony. Each morning, males and females of these Asian apes sing love duets to each other as the mist burns off the rainforest. The duet is repeated in such precise sequences that it often takes newlyweds many months to learn to make beautiful music together. In a duet between a male and a female, the female's part is a long, rising series of notes that end in a fast "twitter". The male's song is less complicated. He grunts, squeals and whistles in delight. (Sounds familiar) 2) Tarsiers – Tiny Tenors:
These tiny, uber-cute, wide-eyed primates use sound as part of their courtship rituals, performed by the male. During courting, potential partners often chase each other around while making distinctive soft sounds. The male, if aroused, will escalate his sound within five minutes of merely looking at an attractive female. The female, if receptive, will display her genitals invitingly; however, if she is not sufficiently wooed, she’ll emit an antagonistic call, often followed by biting and pushing the male away. Ironically, when mating begins, they maintain complete silence. Once bonded, Tarsiers are extremely vocal and make loud shrieks with their partners. In fact, they call in harmony, with each partner making its own distinct sounds. (I got nothing here--I'm still stuck on the female openly displaying her genitals) 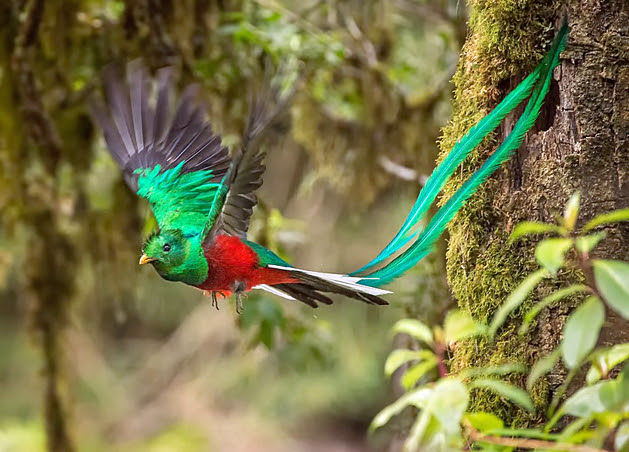 3) Resplendent Quetzal: Beauty with Equality: Perhaps the most beautiful of all birds, the resplendent quetzal sports gorgeous two-foot-long green tail feathers, a red breast, blue sides and green crown. In February, just in time for Valentine’s Day, males begin an elaborate courtship ritual to entice females. In a dazzling display of color and sensuality, they circle in the sky with their long tails dancing behind them, then dive down to the cloud forest treetops in hopes of attracting females. By March, once a mate has been selected and the mating process is underway, males can easily be seen sharing nesting duties with females, alternating guarding the eggs every half hour, including sitting on them (the male quetzal is an excellent role model, IMHO) 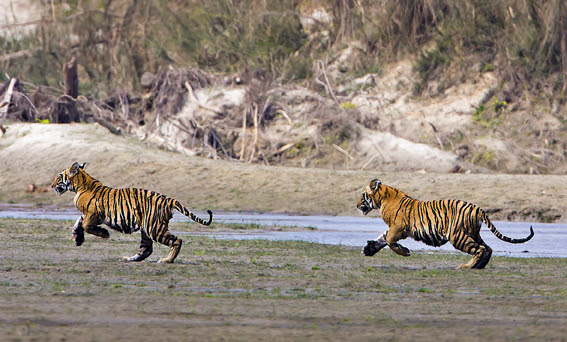 4) Tigress – Saving Herself for True Love? Female tigers distinguish between true love and “friends with benefits”. Normally tigers take as long as a full day to develop mutual confidence, through ritualized purring, playing and moving their tails left to right with spring in their steps.  Once the tigress has developed confidence, she will roll over on her back in a playful manner, rub her face, and move closer to the male tiger, who will mount her. Their climax is signaled by a loud roar. Then the tigress turns her head and takes a swipe at the tiger with her foreleg. The tiger instinctively takes evasive action. The tigress then rolls over her back to facilitate insemination. However, if the tiger is a transient male just passing through the area and its dominance is not clearly established, the tigress will treat him like a “friend with benefits”, engaging in “false mating”, but not rolling over on her back.
(I don't know--nookie after only a "full day" of courtship still seems rather slutty to me. Plus, that transient male --seems to me he's getting all the upside without getting kicked in the face) 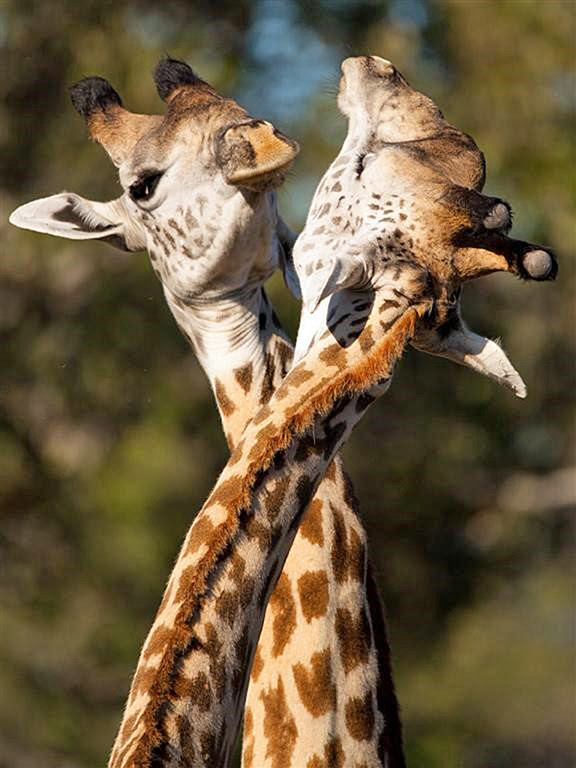 5) Giraffes – Nature’s Great Neckers: Male giraffes will establish dominance by swinging their heads and necks at each other, followed by a longer period where they will caress one another with their necks and then actually have sex, including reaching climax. Interested females also rub their necks against potential mates as part of their courtship. Recently, researchers also observed adolescent giraffes performing a complicated, prancing, dance-like step that some observers have compared to the fox-trot.  Could giraffes be nature’s greatest romantics? (Is this where the term "necking" came from?) 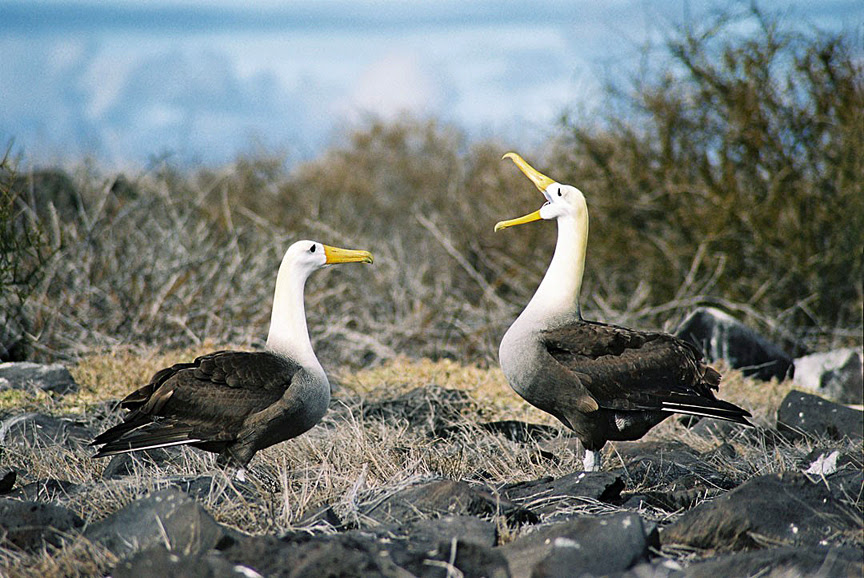 6) Waved Albatross – Kissing Fools: The complex and expressive courtship ritual of the waved albatross includes extensive kissing and bill-fencing, in which the partners bend, face each other in an exaggerated upright posture, open their bills wide and shut them with a loud clap, often alternating with rapidly clattering their bills or slapping them back and forth. If that isn’t strange enough, they will also bow and circle each another while swaying their heads from side to side in an exaggerated manner.  The newer the pair, the longer and more elaborate the dance. (New reality show on Animal Planet: Dancing with the Albatrosses)

For detailed itineraries, visit http://www.wildplanetadventures.com/.
Posted by Laura Powell at 6:00 AM