I've written hundreds of posts during the five years Daily Suitcase has been in existence. But certain topics always seem to resonate with my dear readers. They include accounts of exotic excursions; my infatuation with Idaho;  my proclivity for punning; and rants against hackneyed travel writing. But by far the most popular post ever...and this is the naked truth...is the tale of going au naturel at a German spa.

But that's just a tease, because I am going to do my Top 9 countdown in reverse, in threesomes. Today, you get numbers seven, eight, and nine.

9. A Trans-Siberian Postscript: An account of  my adventures on the Russian rails.

8. It's Just Another Manic Punday: Although I have recently started a #ManicPunday gabfest on Twitter (every other Monday from 12:30-1:00 PM EST....please join in), this success of this early quip of the same name astounds me. If you don't feel like clicking the link, below is the post in its entirety.

I have been staying at the Peabody Hotel in Orlando the past few days for a speaking gig at a travel industry conference. Inspired by the ducks that march through the lobby here on a daily basis, I present this week's Punday entry. Hope it quacks you up. 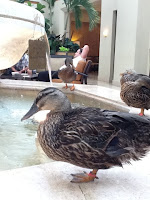 7. Go Directly to Jail:: I've been collecting international versions of Monopoly for 25 years. I have nearly 50 boards, but.those bought in Communist countries are my pride and joy. Yes, I have authentic 1980s versions of the game that celebrates capitalism at its most unscrupulous from Yugoslavia, Poland, and Romania. This post recounts tales of the chance discoveries.

In the next post, we shall move up the food chain. Expect stories from the Spud State
and my beefs with bad travel writing.
To be continued ...
Posted by Laura Powell at 10:03 AM