Of Monopoly Mania and Mongolia 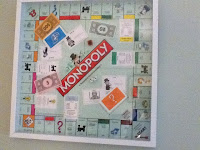 Devoted readers know about my obsession with collecting Monopoly games around the world. If you need to catch up on my fetish, proceed directly to GO, or if you like, let's hang out in free parking. For those who prefer the Cliff Notes version, my one and only must-buy when abroad is Monopoly. I don't particularly like playing the game, but over the years, I have purchased about 40 boards and have framed about 30 of them. My most recent purchases took place in the Baltics, where I scurried to find a Lithuanian version in Vilnius and picked up two-for-the-price-of-two in Estonia (both the Estonian edition--right--and the Russian release--and please note the awesome alliteration in that run-on sentence).

Thus I am sad to report that my most recent trip--to China, Mongolia, and Russia--yielded no boards. Of course, as noted above, I bought the Russian rendition in Estonia, so there was no need to repeat. To pay homage, however, I did actually find the game in TSUM, the lesser-known version of GUM. Both were stolid department stores back in Soviet days, best known for empty shelves, long lines, and surly service. Now, they are very fancy. TSUM's tiny toy department was located downstairs adjacent to the food hall, into which I had run in search of a piece of fruit. Anyway, because I actually saw the game in Moscow, according to my rules (which require that I have actually been in-country---although truth be told, I gladly accept presents from all countries), I can consider my Russian board authentic, even if bought in Tallinn. 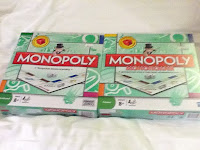 China, of course, still being officially Communist (though you'd be hard-pressed to tell if you were a visitor from Mars), does not condone the homage to capitalism that is Monopoly. There is a Chinese version sold in Taiwan, and I imagine that if one looks hard enough, one can find an underground game in China. But I was too busy playing Operation in Beijing to take time to look. And truth be told, it likely would have been time wasted (like my day of searching in Bangkok, as outlined in the first-paragraph links).

But Mongolia, ah Mongolia. This is truly a sad story. Now, I would never have expected to find a Monopoly game in the remote, formerly Communist country of Mongolia. And given that just two days would be spent there during my Trans-Siberian trip, I noted in advance it would be unlikely that there would be time for a search. My actual journey to Mongolia, moreover, was further shortened by my adventures in Chinese medicine (again, test link in previous paragraph). I ended up spending just one day there.

Most of that day was spent at a lovely national park two hours from Ulan Bator. When we got back to the city around 6:30, our guide suggested a cashmere stop. Apparently, the day before, while I was laid up in my hotel room in Beijing, the entire group had been given a choice between shopping at a department store or shopping for cashmere. The majority opted for the department store, so the wool buyers amongst us were left feeling sheepish. Anyway, the cashmere shop was very close to our dinner site, so many were bullish on the detour and rammed into the store.

It was at that point that a fellow American traveler asked me if I was going to buy anything. I said no, that the only thing I buy overseas is Monopoly. And then she shrieked the words I still rue, "When we were at the department store yesterday, I saw a Monopoly game front and center and thought it interesting."

WHAAAAAAAAAAAAAAAAT? Not only was there a Mongolian version of Monopoly, but had I been with the group, I would have stumbled upon it with no effort. Imagine the joy that would have instilled in me. Instead, I was deflated, but defiant. Maybe I could get to that Monopoly game before leaving Mongolia. Alas, I was told that, given the horrible traffic in Ulan Bator and the time of day...or rather, the time of night...the store would likely be closed by the time I got there. I believe, in retrospect, this was actually a clandestine attempt to keep me with the group--and since I was still feeling the after-effects of my heat exhaustion, I wasn't exactly in condition to argue. And so, no Monopoly from Mongolia. I was morose.

Now, you should know that aside from my compulsion to buy Monopoly, I also tend to obsess about stupid things (TMI about OCD?). At any rate, for days after, I was repeatedly thinking how cool that game would have been--a board from a former Communist country, from one of the most remote places in the world, and in Cyrillic to boot. I wondered how much the board cost--they usually retail around $40, although I have purchased a game for as little as $1 (Poland) and as much as $70 (Sweden). I wondered what the board looked like. I wondered if the board featured Ulan Bator exclusively, or, like my Canadian and Austrian versions, showcased cities around the country.

Of course, I'm over it now (as you can tell from this extended blog post). I realize I now have two options. I must go back to Mongolia. I actually would really like to do so, perhaps to stay in a yurt or to check out the famous Naadam Festival--although that is in the summer, so given my heat sensitivity, maybe another time would be better. 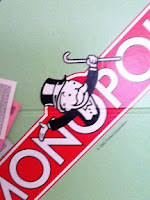 If I don't get back there soon, though, dear readers, it is up to you for relieve my pangs of regret. If by chance you are in Mongolia, go directly to the damn department store and please buy me my game. I will, of course, reimburse you for the cost of the game and for transportation. Let me clarify that, though--I will cover your cab from your hotel in Ulan Bator to the store. I khannot pay for airfare to Mongolia. I am not, after all, Mr. Moneybags.

your blog is fabulous
really great :)