Is your New Year's Resolution to learn a new language? One of mine is to polish my rusty Italian tongue (figuratively, not literally, of course). Thus, I am now taking classes with a lovely group at Casa Italiana in Washington, DC. But some six or seven years ago, my place of study was Bologna, Italy. Here is a recap of the adventure written for Ambassador Magazine.
------------------------------------

Learning vacations are all the rage these days. And among those who can trace their genes to another country, a popu­lar option is to learn a language at the roots of the family tree.
Fortunately for those of Italian heritage--and even for those with nary a drop of sangue italiano -- the options for studying the language in the old ­country are abundant. In fact, perhaps the hard­est part of studying in ltaly is making the decision of which school to attend. 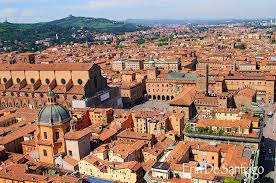 After four weeks of studying at Cultura Italiana in Bologna, the biggest lesson I learned was that in order to get the experience you expect, you need to ask the right questions prior to enrolling in a particular school. Before detailing a list of questions, let me relate my own experience at Cultura Italiana.

It's funny how the adult brain doesn't process language quite as easily as the more nimble, less-cluttered teenage mind. While the ability to learn languages easily may be the province of the young, it is never too late to give the process a go.  As I had quickly learned to speak fluent Spanish as a teen, I figured it would be a breeze to pick up a sister Romance language like ltalian.  However, a spell studying Italian at a Santa Barbara community çollege taught me that while learning grammar was a proverbial piece of torta, the difficulty, dear Brutus, was in the oration.

Ergo, I came to the conclusion that the only way to learn to speak properly was to go to school in Italy and become immersed in the language for several weeks.

Making that decision was easy. Selecting a school from among the hundreds of choices was the chal­lenge. After surfing the Internet, I found a virtual plethora of programs for everyone from the novice to the novelist. Name a pIace - Firenze, Perugia, Roma, Milano, Salerno, Lucca - and there was a school... or two...or three...in each. Given the choices, I turned to the Istituto Italiano di Cultura (IlC) in San Francisco, one of five such centers across the United States.  The cultural office of the Italian Ministry of Foreign Affairs, the IlC offers an extensive scholarship program with the mission of promoting Italian culture and language. The IlC selects candidates for full and partial tuition scholarships offered by more than 50 schools.

I applied for and received a scholarship to Cultura Italiana, a school located in a former palazzo in Bologna (the program also has a branch in Arezzo). I was to study Italian in class four hours a day, every week ­day, for four weeks. Additionally, I would be placed in a home (or so I thought) where I could practice my Italian every night with a host family.

The instruction was excellent, as classes were molded  to the needs of the international group of students. But, I did have a few beefs with my Bologna experience. Opportu­nities for socializing with other students outside the classroom were limited and the school had no  common areas for gathering and group study. The living situations were not ideal (see Parte Due). Plus, when students  went "home" at night, each headed to a different area of the city, making evening tete-a-tetes quite a test.

While my weeks of study did not allow me to be fluent enough to write this article in Italian, I did gain valu­able knowledge. For now I am fluent in the ques­tions you need to ask in order to ensure you receive the educational/cultural/social experience desired during the course of an intensive language course. 9 Questions to Ask When Choosing a Language Program is next.
Posted by Laura Powell at 3:48 PM