God Bless Bieber, God Save the Queen, and God Knows What Else is in SkyMall


This post was originally conceived as a piece about helpful items to bring on a two-week TransSiberian Express adventure. However, a change of itinerary left me merely armchairing SkyMall on a plane rather than giving berth to an article on train travel.

Having never read SkyMall cover to cover, I took the opportunity to do so on a flight from Washington, DC to San Francisco. Below are some of the items that intrigued me, amused me, or otherwise unhinged me.

Let’s start with the erudite. I never mind a little in-flight education, unless it comes via a boring seatmate. The best way to learn and to shut out said space interloper at the same time is to throw on some earphones and listen to your lovely Complete Works of Beethoven, only $169.00 on SkyMall.  Or opt to learn a language via Rosetta Stone. Courses cost between $179.99 and $499.99 and they include an app for that.

If your body is aching in flight, as mine was, the appeal of the SomaWave Helmut ($79.99, batteries not included) beckons. Sure, you’ll look like a space alien or an escapee from an insane asylum as you don the metal cap.  But the catalog copy insists it’s “like having thousands of tiny fingers stimulate your scalp“ and  its "euphoria-inducing waves may produce sleep or a trance-like state of consciousness."  If it sounds too good to be true, note that the product reviews tell potential purchasers to wave bye-bye to this flight of fancy.

A little less high-tech is the ReLeaf Neck Nest ($19.99). You’ll look like a stylin’ Catholic priest wearing a black dickey highlighted with royal blue. Unlike U-shaped pillows that plop your head forward, this clerical collar keeps you on the straight and narrow. And you can fold it up and throw it in your carry-on.

Now, if a long plane flight has your spirits down, SkyMall believes there might be some magic in star power. Take, for example, Justin Bieber Singing Toothbrushes. You have two choices. One plays Baby and (appropriately) U Smile, while the other plays Somebody to Love and Love Me. Each tune lasts two minutes, which is optimal brushing time, according to nine out of ten Canadian dentists. Vibrating brushes range in price from $14.99 to $27.99, although you can also buy a mute manual Bieber brush for the bargain bounty of $2.99. And just in time for food stuck between teeth--mint-flavor Bieber floss ($2.99).
Loony. 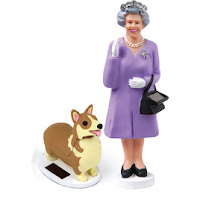 For those with a little more class, how about a Diamond Jubilee Solar-Powered Queen? A solar battery in her purse ensures that familar steady steady wave ($21.95). If you like, you can accessorize the monarch with a solar-powered corgi ($14.95), who will nod his head happily. Prince Philip not included.