Where Women Rule in Washington, DC

---
While the proverbial White House glass ceiling is still intact (sigh), there are a few places around the nation’s capital where women rule the roost. Sadly, those places are not in the halls of power, still dominated by a (white) male majority. But if you want to focus on the history and accomplishments of women, Washington DC does offer several museums celebrating the fairer sex.

It’s likely politic to start a tour of dynamic dames at the Belmont-Paul Women's Equality National Monument. The National Park Service added the Capitol Hill museum site to its roster in 2016. The historic building was once home to the National Woman’s Party (NWP), which led early movements for equality and the right of females to vote. When the party purchased the house in 1929, it evolved into a center for feminist education and social change. 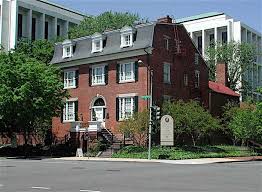 Today, the museum honors the Suffrage Movement (it’s named for two early suffragettes--Alice Paul and Alva Belmont), along with the continuing fight for equal rights. Memorabilia includes Susan B. Anthony’s desk, Elizabeth Cady Stanton’s chair, a fine arts collection depicting famous women in American history and the wood blocks used to print suffragist literature. There is also a textile collection of banners, capes and costumes used by the NWP while picketing the White House or marching in parades and equality demonstrations between 1913 and 1970.
Next, head to downtown DC to recognize creative women of another character. The National Museum of Women in the Arts calls itself the only facility in the world dedicated exclusively to examining the work of a broad array of female artists. The institution has a permanent collection of 4,500 pieces, some of which date back to the 16th century. More than 1,000 artists working in a variety of mediums are represented, including Mary Cassatt, Élisabeth Louise Vigée-Lebrun and Joana Vasconcelos. The museum regularly presents rotating special exhibitions featuring innovative female artists from around the world. The role of the female artist is also explored through film, cultural conversations and artist talks.

There are statues of Jefferson, Lincoln, Lafayette, Einstein and dozens of other statues around DC dedicated to dudes. Women are not as well-represented (imagine that), but there are some sculpted homages to the country’s fiercest females.


More ideas, including monuments and statues dedicated to strong women, can be found here.