One Token Over the Line

Few Monopoly fans seemed steamed when the iron token was summarily dismissed this winter. However, this new wrinkle left me feeling flat. But in other countries, the pressing news about the ironing board most people. Why? Because, as I discovered by studying the 25 Monopoly boards that cover my walls, most foreign games have never used the lowly household appliance as a token to begin with.

Indeed, my in-depth investigative reporting from the walls of my house ferreted out the following: Only 20% of my games (including Ireland, seen at right) sport the iron. Neigh, many European and South American boards replace the iron with a guy on a horse. Por ejemplo, Argentina, France, and Hungary all opt for a hunky horse-bound hero. 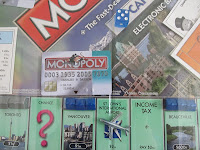 Some of my newer games, circa this century, not only have no iron, but have replaced some of the other standard tokens through the course of modernization. For example, both Canada and Denmark replace the battleship with an airplane, and the shoe with an in-line skate. Several countries are also opting to add a cell phone (albeit the old-fashioned fold-up version versus an iPhone) in lieu of the hat.

Some international versions of the game, for want of materials, proper molds, or a larger manufacturing budget, replace tokens with standardized plastic game pegs. Confusingly, the Tunisian version employs plastic horse heads (resembling a chess knight versus the one in The Godfather). Even more confusingly, I bought the Tunisian game in a souk in Marrakesh. It was not until I returned to the U.S. of A. that I realized something was rotten in the state of Denmark. 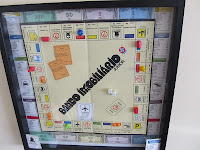 But I digress. Back to the pegs. Some of the games designed for kids also employ pegs, perhaps for fear that a small dog or a miniature thimble can be easily swallowed by a ravenous child. My Brazilian Banco Imobiliario Junior is such an example. I would love to wax on about the adult Brazilian, but unfortunately, when I asked the concierge at the Rio de Janeiro Marriott to track down a game for me there (as I was on a tight schedule), she came back with the darn kids version. Perhaps she thought I was on a thong-string budget. At any rate, other games that incorporate pegs are either knock-offs--Jordan, Poland--and/or relics of Communist days of yore--Yugoslavia, Romania. 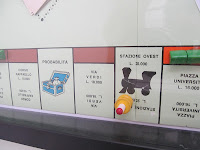 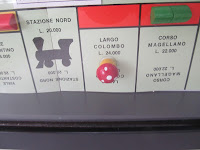 The game that takes the cake in terms of its tokens is that of Italy. My Italian Monopoli board, circa 1985, features among its tokens a candlestick, a bottle of chianti, a cheese shaker and a mushroom. All of the miniatures are crafted from wood and painted with vibrant colors.

In an upcoming post, I will detail the differences in money. But let me say here that I am distressed that my most recent purchase does not even include cash. The Canadian version circa 2012 instead uses credit cards and some electronic gizmo that looks like an old Texas Instruments calculator. No Canadian dollars? That's just loony.
Posted by Laura Powell at 9:11 AM