...are among the topics I've covered for Orbitz Blog this month. Here are links for your reading pleasure.

Pooch hounding you for a vacation? Here: 7 Pet-Friendly Hotels Every Dog Should Visit 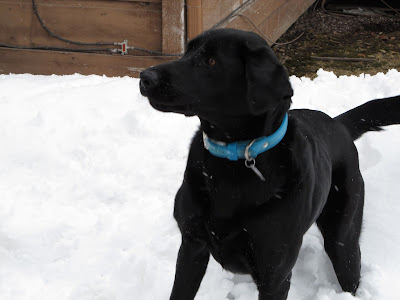 Funny bone need a tickle? Just for laughs, here's a peek at some of the world's top comedy festivals. 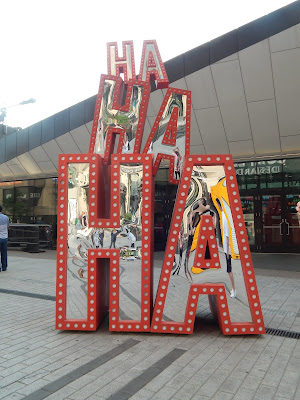 Traveling to DC? If so, here's intel on the city's most buzz-worthy neighborhoods and here's a look at places in Washington where women rule.

Finally, if you are looking for the Old West, consider starting in Kansas.


Posted by Laura Powell at 5:18 PM No comments:

Masters of Pun Compete For Laughs (And Groans) At D.C. Improv 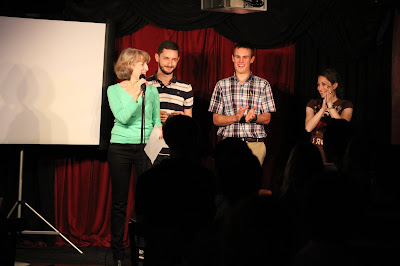 Aaron Schwartzbaum’s jokes, heavy on wordplay and delivered with a wink, inspire much groaning among his friends and family. “I’ve been pissing off all my friends for years,” he says.
When he saw on Facebook that DC Improv was hosting a pun competition back in March, he signed up immediately. He enjoyed the first experience so much that he returned for the second iteration several months later, where he took second place with a prepared speech. And last night, he returned again — and won, not once but twice, on the strength of puns like these, centered around Europe:
“I don’t want to kiss and tell here, but I did see her Netherlands.”
“Her roof was leaking water and I actually used her pet rodents to plug it — yeah, I made a hamster dam.”
“I hope I was able to Sweden your evening.”
Schwartzbaum sparred with a handful of other pun wizards during two rounds of competition at last night’s DC Improv event, part of a recurring series that organizers hope will become a bi-monthly tradition.
The “Beltway Pundits” event, which includes a round called the “Punger Games,” focuses squarely on a brand of humor that some comedy snobs dismiss as lazy or lowbrow. But for the event’s founder Laura Powell, whose business card describes her as “pundit-in-chief,” puns represent a performance style that holds untapped potential.
“It’s kind of like this underground form of humor,” Powell says. “It’s often called the lowest form of humor, but I find that offensive.”
Powell, who’s competed at the international level in the O. Henry Pun-Off World Championships, created the event after taking a few comedy classes at DC Improv and realizing that she could put her longstanding love of puns to productive use at the venue. She’s been pleased with the turnout so far: The 60-seat DC Improv lounge area has sold out for all three performances, and the later events have brought a mixture of returning competitors and fresh faces.
The two-part event begins with a series of prepared speeches of two minutes or less from registered competitors. Each speech has a theme — last night’s included the election, cars, Donald Trump, short people, math and dating. Some speeches tell a coherent story with puns scattered throughout; others place the jokes front and center.
Powell awarded a score from 1 to 10, as did her fellow judge Brian Agler, the champion of the first speech round back in March. Both were looking for dazzling wordplay, and they also took the performers’ timing and confidence into account, according to Powell. “We try not to be too harsh because we realize people aren’t professional performers,” Powell says.
After a short break, participants are joined by competitors from the audience for a bracket challenge. Two or three contestants at a time stand on stage and take turns delivering puns from a given topic. If you flail, you fail. The person left standing moves on to the next level of the bracket until only one remains.
Last night, that one was Schwartzbaum, already glowing from his first-round win. He told DCist before the second round that he thinks improvising puns on the spot is harder than delivering them in a pre-written statement.
“Normally it involves a bunch of giggling to myself in the shower thinking, ‘That’s a good pun,’” Schwartzbaum says. “Then I’ll keep it in my head and see if a theme emerges.”
Not twenty minutes later, he eked out a win on the strength of puns like “Go puck yourself!” Competition was fierce, though. Several competitors who appeared to struggle with nerves in the prepared round came alive in the second half, while others appeared more comfortable with paper in hand.
The enthusiasm for the event within the room wasn’t hard to miss. Competitors laughed, joked and hugged each other throughout the night. High-fives were exchanged, friendships forged. One particularly eager competitor told the event’s sound manager Chris White to keep the tradition going.
“This is a great event,” he told White. “Please keep doing more of these. It’s so much fun.”
Probably, though, he meant to say "so much pun."
Posted by Laura Powell at 9:09 AM No comments:

Ways to Get Around the State

By Motorcoach
Red Coach USA has luxury buses that whisk passengers around Florida.

Laura Powell ‏@dailysuitcase A4: Remember that there are often drop-off fees if you rent a car in 1 place  & drop in another. Consider a bus between cities #TravelTopics
By Boat

Kerry @LFCandtravel
I recently stumbled across this great place providing air boat rides on the east coast of Florida!

By Pedal and Paddle Power

Do Orlando North ‏@DoOrlandoNorth  A4: Play and explore — safely—  with @LimoCycle.

Posted by Laura Powell at 2:00 AM No comments:

Funicular is one of those funky terms that gets tossed around a lot. A hybrid of a railroad and an elevator, the term is often used to describe cog railways or even aerial cable cars. But the only authentic funiculars are those having two cars of equal size connected by a cable looping over pulleys and a drive wheel. As the drive wheel moves the cable, one car goes up the track while the other goes down. Funiculars are used on slopes too steep for conventional railroads. If you’re so inclined, ahem, here are the world’s coolest funiculars. 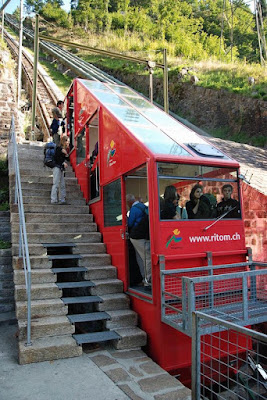 When it comes to steep slopes, there’s no place like the Alps. That’s why when it comes to funiculars, Switzerland, to mix metaphors, takes the cake. The Alpine nation has dozens. Some of the more popular ones among tourists are the Harderbahn in Interlaken; the Marzilibahn in Bern, connecting the Marzili neighborhood to the Bundeshaus, the seat of the Swiss government; and Ritom, one of the steepest funiculars in the world, measuring 2579 feet in altitude at a maximum 87.8 percent gradient. It’s by Lake Ritom in the Southern Alps canton of  Ticino which borders Northern Italy.

Speaking of Italy, the funicular fun continues near Lake Como. The Funicular Como-Brunate connects the “metropolis” of Como to Brunate, a picturesque small town located in the mountains. The funicular opened in 1894, coinciding with the early days of tourism in the area. Today’s visitors experience a seven-minute ride offering stunning views along the way. 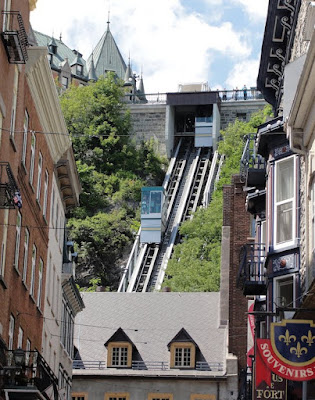 In days of old, many funiculars were designed to connect a city’s upper and lower towns. Such is the case in Quebec City. The funicular linking the two parts of this UNESCO World Heritage site dates back to 1879. Located in the historic district, the Old Quebec Funicular serves as a direct link between Dufferin Terrace, located outside the storied Chateau Frontenac Hotel, and le Quartier du Petit Champlain and the Old Port below.

Pittsburgh, Pennsylvania sports three rivers and two operating funiculars. The Monongahela Incline was built in 1870 and is the oldest continuously operating funicular in the United States. It is one of 17 that were originally built to carry folks from hillside homes to work during the late 19th century. The other from that era still operating is the Duquesne Incline. If it looks familiar, you might have seen it in the movie “Flashdance”.


Dubuque, not to be confused with Duquesne, is in Iowa. Its Fenelon Place Elevator is likely the shortest funicular in North America. It’s 296 feet in length, stretches steeply from downtown to the summit of Dubuque’s bluffs. At the top, take in a magnificent view of the historic business district and the mighty Mississippi River.

Posted by Laura Powell at 12:00 PM No comments:

Georgia, the former Soviet Socialist Republic, is coming into its own. More than a quarter-century after gaining independence from Russia, the country is waving the tourism flag. While some of its outermost reaches may not be quite ready for prime time, there’s no doubt that capital city Tbilisi is set for its star turn. A city of about 1.5 million, Tbilisi has a long and winding history, dating back to the 4th century. The layers of history are everywhere including in the architecture, the traditions, the food and the wine. Here are the key things every visitor must do in this fascinating city: 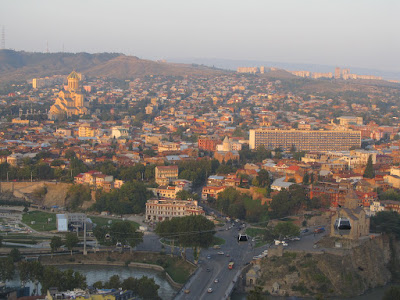 Explore the Old Town
The best way to start a tour of Tbilisi is by roaming Old Town Tbilisi, a mish-mash of architecture and cultures. Its Art Nouveau buildings and neoclassical facades may remind some of a shabby-chic version of the backstreets of Paris. Meandering the cobblestone streets and narrow alleys will lead visitors to hidden courtyards and houses of worship for several religions. With its numerous cafes, this is a good place to sip coffee or enjoy a glass wine (read on!). 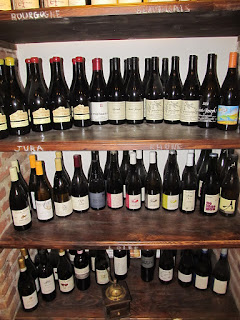 Wine about Your Visit 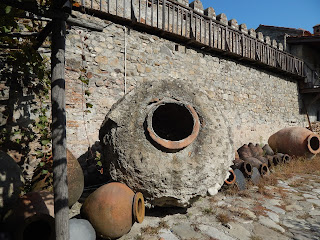 Georgia claims to have the oldest wine culture in the world, dating back 8,000 years. Wines are traditionally made in huge earthenware pots called qvevri. This unique wine-making system is part of UNESCO’s List of the Intangible Cultural Heritage of Humanity. So, it is incumbent upon every visitor to partake of the grape by sampling at a restaurant of visiting a wine shop.
Take a Bath
At the edge of Old Town is the Abanotubani district, known for its underground sulphur baths. These baths, built in the 17th century, are topped by brick domes and heated from hot springs below. The blue-tiled Orbeliani Bath is one of a handful that still offer traditional hammam-style treatments.
Study Georgian 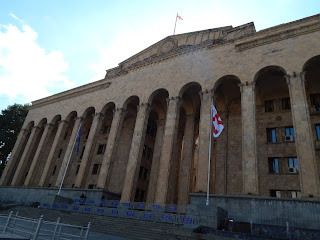 Not the language (good luck with that), but the history. The Georgian National Museum covers the entire 40-million year backstory of the country. Don’t miss the Treasury, filled with ancient gold artifacts and jewelry, and the Museum of Soviet Occupation, encompassing an entire floor of the building.
Visit Mother Georgia
The impressive statue of Kartlis Deda, aka Mother Georgia, watches over Tbilisi from a high vantage point. If you don’t feel like climbing up to her, take the aerial tramway to the top of Sololaki Hill. There, you will note that Ma Ga welcomes friends with a bowl of wine, while fending off enemies with her sword. 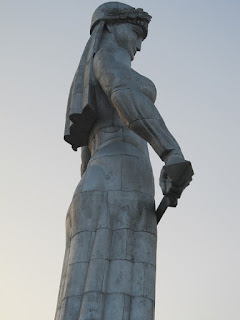 Climb a Fortress
As long as you are on top of the hill, you might as well head over to the Narikala Fortress. Walking along its ancient walls provides an apt overview of the city and its history. This behemoth dates back to the Tbilisi’s founding. In the fortress’s lower court is the restored St. Nicolas Church. 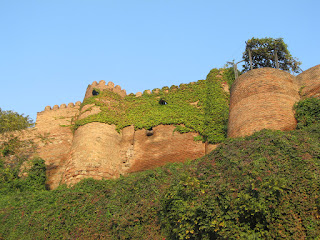 Go to Church
Even for the non-religious, Tbilisi orthodox churches are sights to behold. The biggest is Holy Trinity (or Sameba), the main Cathedral of the Georgian Orthodox religion. The oldest is the Anchiskhati Basilica, dating back to the sixth century. Note the ancient frescoes within.